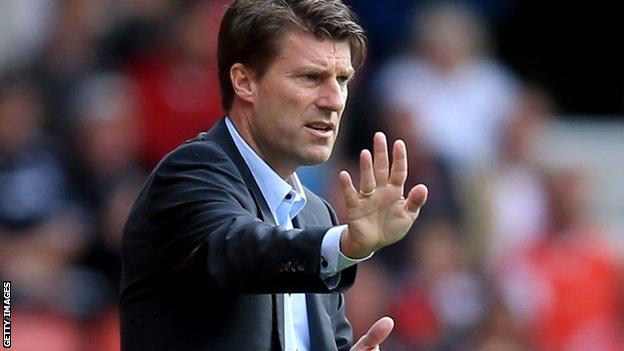 Cardiff host Swansea, who have more than a dozen overseas players on their books, in the first all-Welsh clash in the Premier League on Sunday.

"All the players will know how important it is," Laudrup said.

All fans feel that their derby is something special

"When you walk around in the city, people, even a couple of weeks before, start talking about the game."

Sunday's game at Cardiff City Stadium will be Laudrup's first experience of the south Wales derby.

The former Denmark international, who played for big European sides Lazio, Juventus, Barcelona and Real Madrid in his playing career, will use his previous experience of dealing with high-intensity fixtures.

Laudrup, 49, played in the Rome derby for Lazio against Roma, and during his spell with Juventus faced Torino in the Turin derby. He also figured in big matches between Barcelona and Real Madrid.

"I do know a lot about derbies," Laudrup said in a BBC interview with former Wales striker John Hartson. "It's something special.

"All fans feel that their derby is something special.

"I always heard that when I came to a new place - 'this derby is the special one, the biggest one'. They all say that. They say the same thing up in Glasgow [The Old Firm between Celtic and Rangers].

"I remember when I was a young kid and I arrived at Lazio in Rome. I was only 19.

"Even three or four weeks before they would say 'when we play Roma' and we still had two or three games before that.

"When you hear that, as a player you know they really care about the game.

"Even if we had three or four games before the derby they were only thinking about the game and it's the same thing here."

It will be the first south Wales derby since February 2011, when Cardiff left the Liberty Stadium with all three points thanks to Craig Bellamy's late strike.

Swansea won by the same scoreline in the reverse fixture earlier in the same season, and Laudrup is hoping it is his team's supporters who are celebrating on Sunday evening.

"I think that's what really matters. People from here feel it's the biggest one."