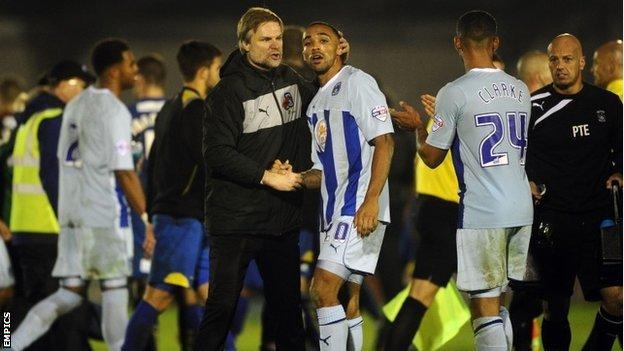 Coventry came from behind to beat League Two AFC Wimbledon to reach the second round of the FA Cup.

The hosts had to make a late goalkeeping change as Seb Brown replaced Ross Worner, who was held up in traffic caused by an accident.

Play was delayed by 15 minutes to help give Worner chance to reach the ground, but with the first-choice keeper still not at the ground, Brown had minutes to prepare.

Brown, 23, had yet to feature for the Dons this season, and it was his error that gifted the League One side a way back into the match. 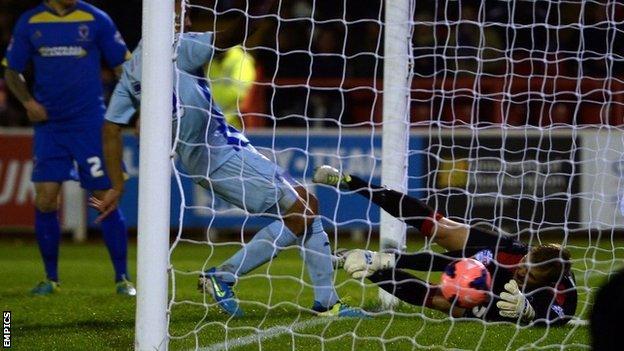 Having spilled Cyrus Christie's innocuous deep cross, Brown recovered to claim the ball, only for him to then drop it on the goal line, leaving Wilson the simplest of tap ins.

And within six minutes the game had turned around.

Wilson and Baker put the Sky Blues ahead, while Kennedy deflected a shot past Brown in the 70th minute to compound Wimbledon's misery.

Wimbledon boss Neal Ardley on Worner missing the match: "These things happen in football and I've told the players I'm proud of them.

"I couldn't see them getting back into the game [until Brown's error]. He knows, I don't need to tell him. The momentum changed from there on and it was difficult.

"Worner arrived on the final whistle, it's a good job Seb didn't get injured."