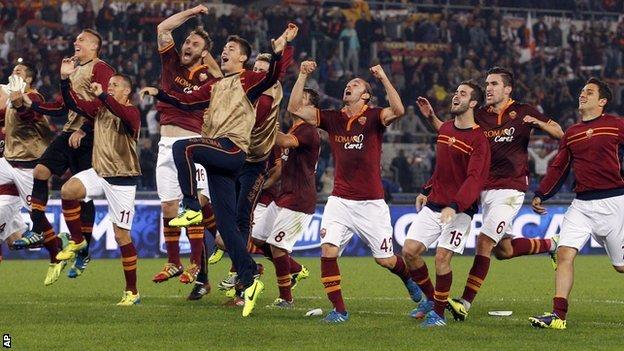 Roma became the first team to win the opening 10 matches of a Serie A season when they beat Chievo 1-0 on Thursday.

Roma, who have scored 24 goals and conceded just one this campaign, lead second-placed Napoli by five points.

"It's a nice satisfaction, we've made history, but now we have to look ahead to our trip to Torino," said Borriello.

"We're also playing very well away from home, but our objective is (to qualify for) Europe."

Rudi Garcia's side equalled Juventus's record of nine opening wins in last weekend thanks to a late 1-0 win away to Udinese.

Juve achieved the feat during the 2005-2006 season, when the Turin giants were stripped of the title and any other related honours for match-fixing.

Despite missing captain Francesco Totti and Gervinho through injury and with defender Maicon suspended, Roma dominated but struggled to break down Chievo before the break.

As the second half wore on, Marquinho was replaced with striker Alessandro Florenzi and the hosts broke the deadlock several minutes later.

Miralem Pjanic's pass found Florenzi deep on the left and the forward's inviting cross was headed home by Borriello from six yards.

Luca Rigoni went close for the visitors late on before Adem Ljajic's free-kick was tipped away by goalkeeper Christian Puggioni to prevent a second.