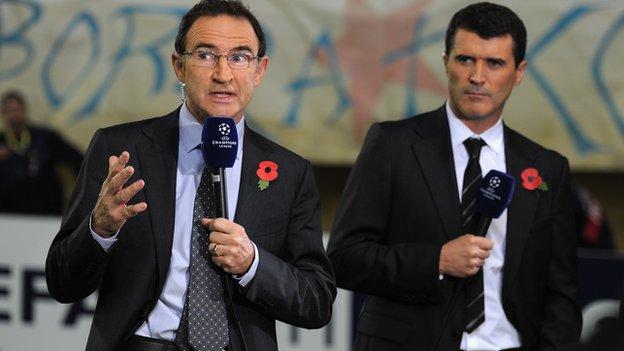 Martin O'Neill is on the brink of becoming the new Republic of Ireland manager and is set to bring in Roy Keane as his assistant.

The Republic's next games are friendlies against Latvia on 15 November and Poland four days later.

The squad for those matches - the first of which is at home and the second away - will be named on Tuesday and O'Neill could be appointed by then.

Italian Trapattoni left in September after failing to lead the Republic to 2014 World Cup qualification.

Noel King took over on a caretaker basis for the qualifiers against Germany and Kazakhstan.

O'Neill was capped 64 times by Northern Ireland and, according to BBC reporter Pat Murphy, is ready to move into international management.

"He is very interested in the Ireland job and there seems no serious impediment to him agreeing terms in the next couple of days," said Murphy.

"Working with Keane intrigues him. He contacted Keane and was encouraged by his enthusiastic response."

Murphy added: "The Ireland players will have idolised Keane as youngsters and O'Neill will be a popular appointment in Ireland, given his success at Celtic a decade ago."

Keane caused controversy as captain when he quit the Republic squad before the 2002 World Cup after falling out with manager Mick McCarthy.

"At the moment there are a few things under way but until things are signed we just have to wait and see.

"Something, hopefully, in the next few days will come about."