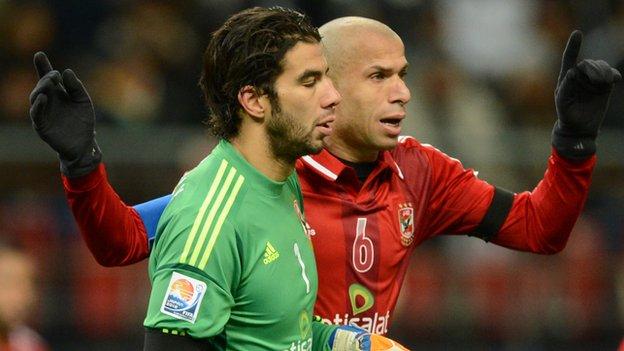 Holders Al Ahly are sweating on the fitness of their goalkeeper Sherif Ekramy while Orlando Pirates have declared a fully fit squad for Saturday's first leg of the African Champions League final in Soweto.

A decision on Ekramy's participation will likely only be made in the hours leading up to the match at the Orlando Stadium, according to the Cairo club's website.

He has been the subject of intense speculation all week as concern over a calf injury continues to overshadow their preparations.

There is also a question mark over midfielder Hossam Ashour, who has had shoulder problems.

Al Ahly have won the Champions League title a record seven times, while Orlando Pirates have been crowned winners only once

Both players have made the trip to South Africa for the final but trained only lightly since arriving early in Johannesburg to adapt to the high altitude.

Ekramy has battled with the injury since being taken off during Egypt's 6-1 thrashing by Ghana in their World Cup qualifier in Kumasi in mid-October.

Pirates look set to restore midfielder Sifiso Myeni to their starting line-up and could be tempted to hand burly Zambian striker Collins Mbesuma a first start since early August.

Traditionally, the South African side play with a lone target man but given the need for goals and to establish a decent lead to take to Cairo for the second leg on 10 November, coach Roger de Sa could be considering using a second striker.

Lennox Bacela, signed in the mid-year transfer window, has been leading the line for the Buccaneers.

Myeni was rested for their match last Saturday against Kaizer Chiefs in the South African league while Mbesuma, once on the books of Portsmouth when they played in the English top flight, has battled with ankle and knee problems in recent month plus his on-going battle of the bulge.

Pirates coach Roger de Sa believes his side is at a disadvantage because they play at home first - and he is eager to keep things tight on Saturday to give themselves a chance in the return in Egypt.

"It is known that it is favourable to play your second leg at home in front of your own crowd, so you play for the result that you need," said De Sa.

"I certainly believe that keeping a clean sheet is important for us. If we can go to Egypt with a good result, then we have got a chance. We have developed a very good mental attitude and are able to go away and get results. But we have got to get a result first and take it with us.

"We have had so many messages of support. Even the Kaizer Chiefs players - who we played against on Saturday - all wished us well.

"From the beginning of the competition we always spoke about carrying the flag, for some of us this is the closest we are going to come to representing the nation.

"I really appreciate the support, the people who are supporting the club with national pride - you don't have to be a Pirates fan, just a South African."