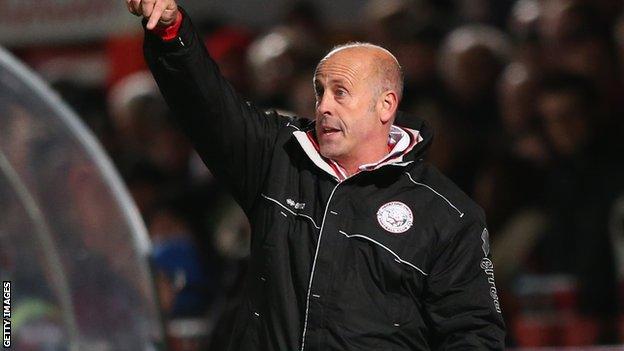 Hereford United manager Martin Foyle has urged his struggling side to "start concentrating on their own jobs".

Thursday's 4-1 defeat at Salisbury left the Bulls 19th in Conference Premier and without a win in six league games.

They now sit just three points above the relegation zone having played a game more than the teams around them.

"Talk is cheap and we've got a lot of chirpers that stand about waving their arms around telling everyone what to do," he told BBC Hereford & Worcester.

"We spent the day before the Salisbury game working on set-pieces and had a really good week of training so I was confident we'd play well.

"But then we fall asleep at a corner, we're a goal down and the situation we are in, the lads' heads drop."

After finishing a place outside the play-offs last term, Hereford made a solid start this season by taking 11 points from their first six matches.

But since then their form has dipped with a run of only six points in 11 games.

"The players let me down," Foyle added.

"Our concentration was so poor and the players just didn't do their jobs. We are conceding poor goals and we might look like a big side but at times, we are frail and weak."