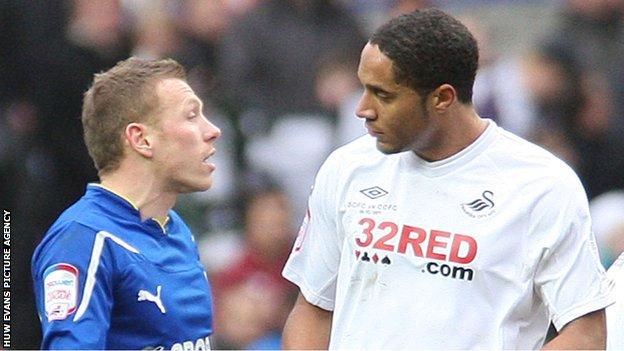 Swansea captain Ashley Williams says the build up to Sunday's derby match against Cardiff "feels bigger" than any he has previously been involved in.

The defender will be playing in his eighth south Wales derby when the teams run out at the Cardiff City Stadium.

But it will be the first time they have met in the top flight of English football.

"The older players' message will be to keep your heads, try not to get involved in all the emotion," he said.

"It's good for us to have a little bit of experience of how it's gone before, but I think this one feels a little bit bigger.

"I think everyone feels that."

Williams and fellow defender Angel Rangel have both played in seven matches for Swansea against the Bluebirds.

The 29-year-old says his experience suggests the build-up tends to overshadow the match.

"I enjoy the build up and everything around it - the atmosphere," added the former Stockport County player.

"But the game itself has always been a very edgy type of game - not an anti-climax exactly but very tight with nobody wanting to make a mistake.

"But the build up, the warm-up and everything around it is great."

Williams says he is looking forward to playing against Wales team-mate Craig Bellamy, who nowed out of international football last month.

The striker scored a superb winner for Cardiff when the teams last met in 2011, and is expected to play on Sunday.

"I expect him to play, I think we all know his qualities and we remember the goal he scored against us last time so we know he's someone we've got to keep a close eye on," said Williams.

"With his experience they'll be feeling he's played in a lot of big games before so if he can boost them.

"I hope he plays, to be honest, because he's someone I can call a friend.

"I get on really well with him on and off the field so I hope he plays because it will be nice to play against him again."