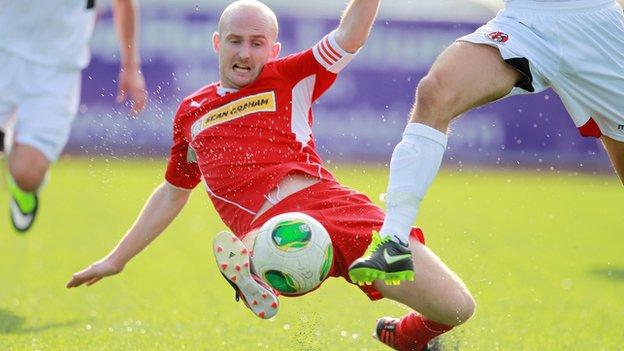 Catney is struggling to make the Solitude clash because of an Achilles injury but Conor Devlin and Jamie McGovern return after bans.

The champions are fifth and six points behind league pacesetters Linfield with the Swifts back in ninth.

Portadown and Crusaders will aim to put pressure on leaders Linfield when the clash in the Saturday Sportsground commentary game.

There will be reports from the other five league games.

However, manager Darren Murphy has James Costello, Adam McMinn and Dermot McCaffrey back in the squad.

Crusaders winger Paul Heatley (groin) is an injury concern for the top-of-the-table encounter with Portadown at Shamrock Park.

The Ports, who are a point adrift of the second-placed Crues, go into the game without Peter McMahon (groin) and Patrick Judge (knee).

Linfield are four points clear at the summitt and they face a top versus bottom game against Ards at Windsor Park.

Back spasms could keep Blues pair Jim Ervin and Aaron Burns out of the fixture.

"People say the league table doesn't tell any lies and yet, the evidence which is clear to me is that on the two occasions when we have played Ards, they have been very, very difficult opponents.

"We're coming off the back of 4-1 victories over both Ballymena and Cliftonville but please believe me when I say that in this league on any given day, any one team can beat any other.

"It's all very tight and if anyone was to think on paper Linfield should win this, please remember football games are not won on paper. I've absolutely no doubt that come Saturday we will face an extremely difficult task."

Ballymena United welcome back Tony Kane from suspension for the Showgrounds meeting with Glentoran, although Shane Dolan is banned.

Glens midfielder Stephen McAlorum is suspended but boss Eddie Patterson is expected to have Johnny Addis, David Scullion and Aaron Boyd back from injury.

Warrenpoint Town pair Daniel Hughes (ankle) and Stephen Moan (ban) are missing for the visit of Ballinamallard to Stangmore Park.