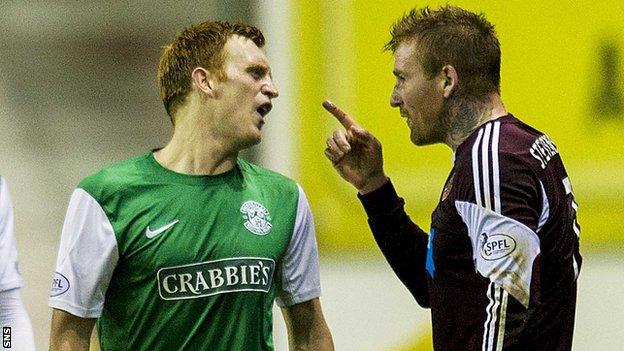 Hibernian midfielder Liam Craig faces a two-match ban for violent conduct after being charged with trying to kick Hearts' Ryan Stevenson in the face.

The incident is alleged to have taken place during Hearts' League Cup win at Easter Road on Wednesday.

Craig has until 15:00 GMT on 4 November to respond to the notice of complaint from the Scottish FA.

A principal hearing date has been set for 7 November, with Craig free to play at Motherwell on Sunday.

Craig is accused of breaching disciplinary Rule 200, with the wording of the charge "violent conduct by kicking or attempting to kick an opposing player [namely Ryan Stevenson] in the face".

If the complaint is upheld, the player will miss the following Premiership match and one match in the League Cup.