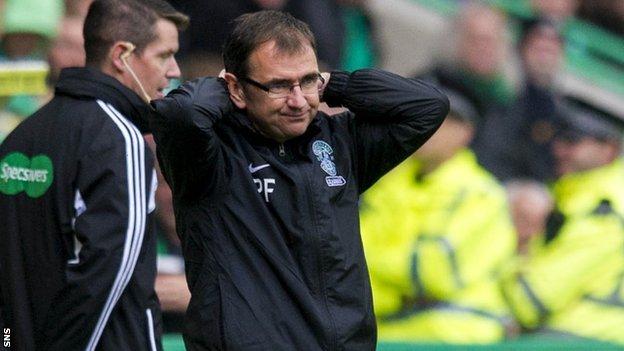 Manager Pat Fenlon has resigned from his post at Hibernian, saying it was "100% my decision".

"It's a difficult decision for me, but it's the right decision," said the 44-year-old, who took over two years ago.

"I think a lot of the negativity is towards me at the moment, so if I take myself out of the firing line it will help everybody else."

Pressure mounted on Fenlon following in the Scottish League Cup.

There was a small fans' protest after Hibs' second Edinburgh derby loss this season but the Irishman insists he had made up his mind to step down following last Saturday's loss to Aberdeen.

"I had no problem with the supporters on Wednesday," he explained. "I felt as bad as them.

"I don't want to let people down and the club have been 100% behind me in every way. I still think I had the backing of the club."

Fenlon led Hibs to successive Scottish Cup finals but could not end the club's long wait for success in that tournament.

The Edinburgh club avoided relegation in his first season and his only full campaign ended with a seventh place finish.

This term opened with a record 9-0 aggregate defeat to Malmo in Europa League qualifying and two league defeats but Fenlon appeared to have steadied the ship with a run of just one loss in nine games before back-to-back home losses to Aberdeen and Hearts.

Assistant manager Jimmy Nicholl will oversee the team for Sunday's visit to Motherwell.

"I've been privileged to manage this fantastic football club and I really hopes it does kick on now," said Fenlon, who leaves with a 35% winning record from 87 games.

Fenlon managed Shelbourne, Derry City and Bohemians, lifting the League of Ireland title on five occasions, before he replaced Colin Calderwood in the Easter Road dugout.

"I'm convinced that we have improved the football side of the club a lot," he added.

"We've got a real good squad there, real good players and good staff.

"This is a really enjoyable place to work, with great people, and that's what makes it difficult to leave.

"People look at the negative side but we are five points off second place.

"I think it's a good time for someone to come in and hopefully kick us on."