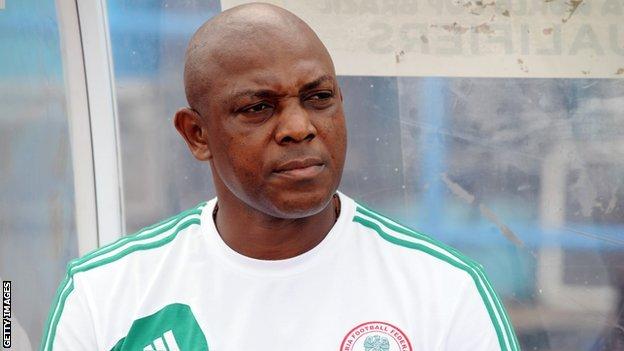 The Nigeria Football Federation (NFF) has paid coach Stephen Keshi part of the seven months' salary he is owed.

Keshi, who is owed more than $217,000, last week described the situation as "disrespectful and unacceptable".

It led to the Nigeria Sports Commission (NSC) querying the NFF about the issue.

NFF spokesman Ademola Olajire told BBC Sport: "We have made a quick effort to sort part of his arrears. We are working extremely hard to pay the coach the rest as soon as possible."

Olajire added that the NFF had put in measures to "help minimise the risk of delays in the future".

"The financial situation of the NFF caused the delay. It is not an excuse; it is a consequence of the financial reality," he said.

It is understood that Keshi has received only two months' pay but the Super Eagles boss has declined to comment.

But one NFF official, who did want to be named, told BBC Sport: "It's just the first step in our desperate quest to sort all his outstanding salary arrears.

"We are hopeful this will be resolved before the end of the year."

Nigeria will face Ethiopia in Calabar on 16 November in the second leg of their 2014 World Cup play-off and are favourites to progress to next year's tournament in Brazil, having won the first leg 2-1.