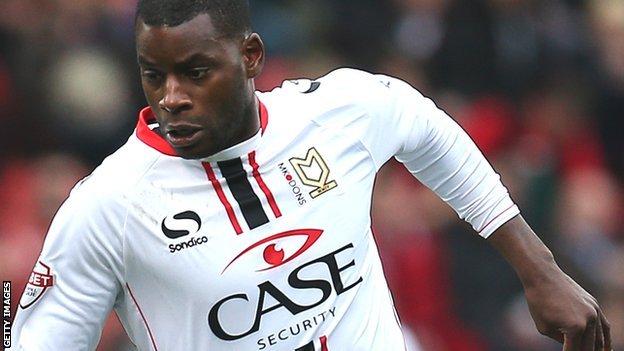 MK Dons manager Karl Robinson insists Izale McLeod remains central to his plans this season, ruling the striker out of any loan move.

The 29-year-old, who returned to Stadium MK in January, had been linked to a move to Northampton.

"There may have been an opportunity for him to go, but he is too important to us at this moment in time," Robinson told BBC Radio Three Counties.

He give us a different threat, he comes off the bench and changes games - he has attitude and passion for the club.

McLeod, MK Dons' all-time leading goalscorer with 63, has made just two league starts this term, and has struck three times in all competitions since he returned to the League One side for a second spell in January.

He has found himself behind on-loan Chelsea striker Patrick Bamford in the pecking order, who has scored 12 times in 18 appearances this term.

Robinson, however, feels the former Barnet, Portsmouth and Charlton Athletic man has more to offer the Dons after 165 games.

"I want people here with the same passion as mine and he has that in abundance," said the MK boss.

"When we are going through a sticky patch, not winning many games, I want to make sure that we are keeping the right people around the football club, those who believe in the football club - Izale is certainly one of them.

"He gives us a different threat, he comes off the bench and changes games - he has attitude and passion for the club."