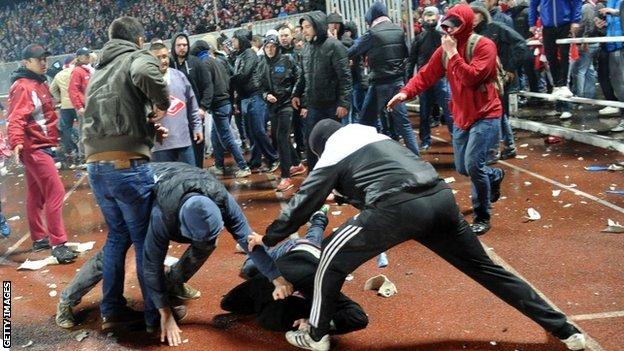 Spartak Moscow have been ordered to play their next two games behind closed doors following crowd trouble in a Russian Cup tie against second tier Shinnik Yaroslavl.

Wednesday's game, which Spartak won 1-0 away from home, was interrupted after fans clashed with police, ripped up seats and threw them on to the pitch.

Spartak have already made an appeal to the Russian Football Union, having sold all their tickets for Sunday's derby with Lokomotiv Moscow, which now has to be played in an empty ground.

The third-placed side will also have to play leaders Zenit St Petersburg with no fans present.

Spartak director general Roman Askhabadze said: "This situation is unprecedented. We have already sold all tickets for the Lokomotiv game, the stadium is supposed to be packed to the limit.

"Forty hours before the game a decision is taken that it will take place without the crowd."

The club were fined £11,600 with Shinnik being fined just under £10,000 and being forced to play three games behind closed doors.

The Russian Football Union also said that fans of Spartak were guilty of displaying a Nazi banner, with the club offering a reward to anyone who could help them identify the culprits.

Police, who had to use water cannons to quell the trouble, detained 78 supporters after the game.