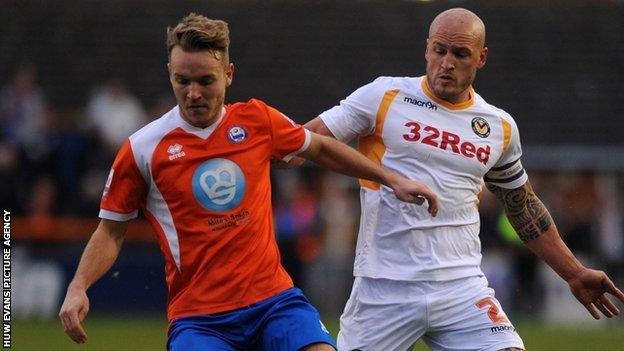 Braintree Town must go to League Two Newport County for an FA Cup first-round replay after Ryan Peters' own goal denied them victory.

The hosts dared to dream of a Cup giant-killing when Chez Isaac hit the back of the net early on.

But defender Peters inadvertently directed Tom Naylor's shot into the back of the home side's net five minutes after the break.

Conference Premier side Braintree must travel to Rodney Parade for the replay.

"I thought we bossed it first half and maybe should have been two up. We didn't come out second half - another sloppy goal we've given away.

"We need eight or nine players at it, I thought we had five. There were three or four we needed to step up and improve their game. That didn't happen and that's why we've drawn.

"We've got a second bite of the cherry, we'll settle for that. If we go there and eight or nine are on it, it gives us a chance.

"You know what our away form is like - it won't phase us. We'll be looking forward to it. There'll be a bit more space behind them."

"I thought it was a very good cup tie. We were fully aware of Braintree's good start to the season and they certainly forced back first half.

"We regrouped and had some words at half-time and I thought we were excellent second half.

"Without some heroic defending from Braintree and good saves from their goalkeeper I think we would have gone on and won the game."