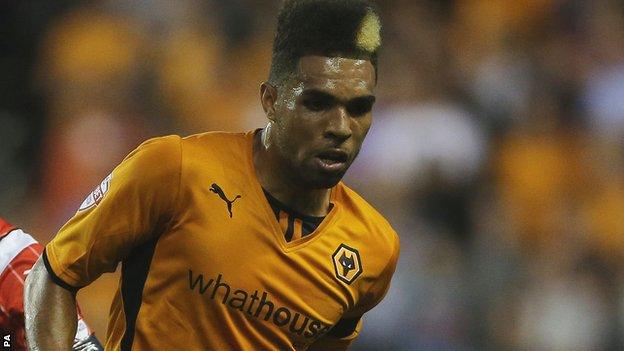 League One duo Oldham and Wolves will need a replay to settle their FA Cup first-round tie after a 1-1 draw in horrible conditions at Boundary Park.

Dave Edwards failed to find the target with two presentable chances for Wolves but Scott Golbourne met James Henry's cross to level for the visitors.

Four-times FA Cup winners Wolves were making their first appearance in the first round since November 1988, and made a shocking start as Angola international Kusunga rose unchallenged inside the penalty area to nod in his first goal for the Latics.

Dayton fired wide for the hosts shortly afterwards, but Wolves, who had 18 days previously, grew into the game and equalised through an unlikely source in left-back Golbourne.

Goalkeeper Carl Ikeme denied Kusunga a second goal of the afternoon, keeping out a low drive that travelled through a crowd of bodies, while Golbourne was unable to convert another Henry cross.

The two sides will now look to the replay on Tuesday, 19 November to progress to the next round.

"I think it was a fair result. I was really pleased with our lads.

"We had some chances in the second half and maybe could have nicked the win, but more importantly I thought my boys were fantastic.

"Wolves are an ex-Premier League side that have still got an awful lot of talent. Sometimes it's hard to get the ball off them."