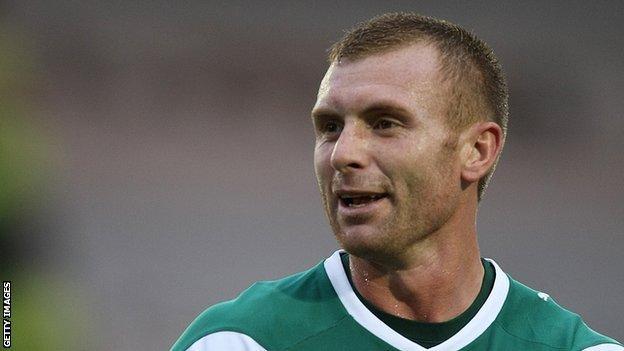 Nick Chadwick's goal was enough for Conference Premier side Tamworth to upset League Two Cheltenham in the FA Cup first round.

Chadwick's right-footed shot was set up by Justin Richards, who out-muscled a defence which struggled against the Lambs' physicality throughout.

The visitors looked disjointed until the second half and almost levelled through Steve Elliott's volley.

But Tamworth went close to doubling the lead numerous times and held on.

An injury time penalty appeal - when the visitors' Keith Lowe went down in the box - could have left the home side to rue Andy Todd's first-half shot against the crossbar and a flurry of later efforts, including Todd's point-blank header near the final whistle.

Cheltenham came close to an equaliser when sub Elliott volleyed acrobatically, but 2-0 looked more likely, with on-loan Chadwick shooting over the bar to miss out on a second goal.

"They've got some good players and it was their day today, they've done a decent job on us.

"I thought we had seven or eight good chances where we've not pulled the trigger or had the desire that the ball finishes in the back of the net.

"We're not kidding ourselves that we're in a good place right now, but there's not a great deal wrong, we've got one or two things to work on.

"It's massively disappointing for the chairman, for the fans and everyone connected to the club. We have to pick ourselves up but we need a long look at ourselves now."