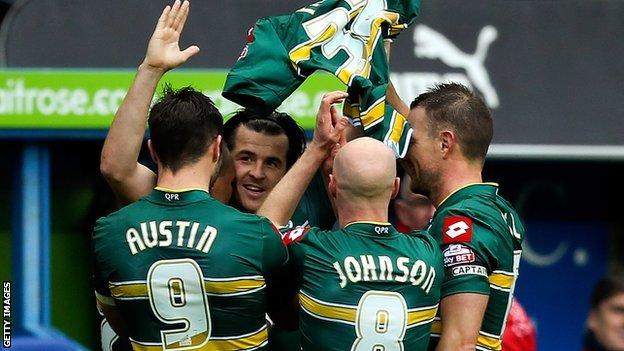 However, midfielder Barton curled in a 20-yard free-kick to level and QPR almost grabbed a late winner when Andrew Johnson shot just wide.

The two teams, who were relegated from the Premier League last season, drew against each other in two league meetings last season - and again they could not be separated.

Rangers started brightly and Hoilett ran unchallenged at the Royals goal before his long-range strike came back off the crossbar, while visiting striker Austin had two shots in quick succession saved by keeper McCarthy.

Reading gradually worked their way back into the game and Jordan Obita had an appeal for a penalty denied after claiming to be blocked by right-back Danny Simpson.

Simpson also poked the ball just wide of his own goal as he got in a tackle on Reading striker Pavel Pogrebnyak.

However, Reading's McCarthy was the busier of the two keepers and he was again called into action to keep out an Austin header and smartly save another Hoilett shot by palming it wide at full stretch.

The heroics of McCarthy proved crucial as the home side took the lead just after the hour mark.

McCleary was not closed down quickly enough and he powered in a 25-yard shot, which evaded the dive of keeper Robert Green and went in off the post.

Substitute Johnson almost snatched the points with a late shot but his effort went wide and the spoils were shared.

"I anticipated a good response [after losing to Sheffield Wednesday] and no one let me down.

"It was a good game with a lot of energy from both sides. We went in front and wanted to see it out but they got back into it with a good goal.

"We keep getting on the scorecard and keep ticking over. As long as we stay in the race, that's the main thing."

"We had a number of chances early on and should have been at least 2-0 up but their keeper [Alex McCarthy] made a number of wonderful saves.

"It would have been a whole different game if it had panned out early on for us. But I knew Reading would eventually come back at us and they did.

"Not scoring many goals does put a bit of pressure on yourselves but, thankfully, we've been mostly tight at the back this season."