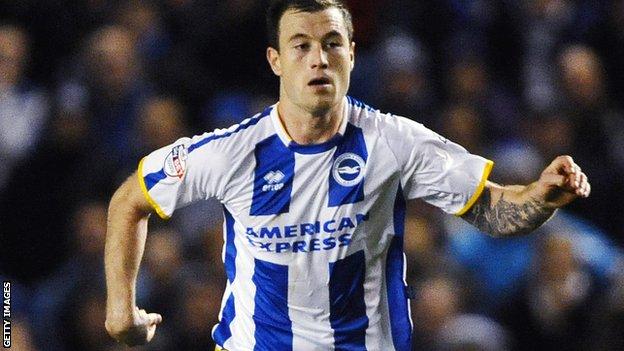 Striker Ashley Barnes scored his first league goals of the season with a brace as Brighton clinched their first home win since mid-September with victory over Blackburn.

Barnes scored his and Brighton's first from the penalty spot after Craig Conway was fouled.

Jake Forster-Caskey added a second with a header before Barnes made the win safe with a close-range finish late on.

The win moved Brighton up to 10th, while Blackburn are 13th.

Brighton, winless in their previous three games at the Amex, had a scare early on when Irish midfielder Alan Judge drove wide from the edge of the area following a good ball in from skipper Scott Dann.

More away day woes for Rovers

The Seagulls struggled to make much of an impact until on-loan Cardiff winger Craig Conway forced former Derby keeper Jake Kean to parry his fierce shot breaking in from the right in the 20th minute.

Rovers defenders Cairney and Todd Kane both needed treatment following a collision inside their own penalty box when Stephen Ward attempted to get around the back of the visitors rearguard.

Striker Barnes wasted a glorious opportunity to put the Seagulls ahead on 33 minutes when he blazed wastefully over after breaking clean through following a mistake by Lowe.

But Barnes kept his cool only two minutes later to put his side ahead with his first league goal of the season from the penalty spot.

Spanish midfielder David Lopez put a free kick from just outside the area over for Brighton but it was Rovers who finished the half on top with both Jordan Rhodes and Dann going close.

Rhodes should have hit the target when heading wide at the far post from a Joshua King cross, and then Seagulls keeper Tomasz Kuszczak expertly tipped over Dann's goal-bound header after Cairney's free kick.

Kuszczak did well again moments after the break by pushing a low drive from King round the post.

But Brighton were not having it all their own way and both King and Cairney had shots saved by the alert Kuszczak.

Young midfielder Forster-Caskey eased the Seagulls nerves, however, by doubling their advantage on 56 minutes by heading in a Conway cross.

Blackburn continued to seek a way back into the game and substitute David Dunn shot narrowly wide before a firm header from Tommy Spurr came back off the crossbar.

"Ashley Barnes wanted to take responsibility by taking the penalty which put us ahead, and that shows he has a strong personality.

"Sometimes fans's opinions can be divided, but with strikers supporters can think only in terms of goals.

"I let the players decide on who takes a penalty and Ashley wanted to score for his confidence. He is a player who helps others to score with his movement."

"We are very disappointed to leave without anything, but we found their keeper inspired. He was the man of the match.

"Unfortunately, we gave three goals away and must cut out individual errors. They are very costly at this level.

"Had Jordan [Rhodes] scored just before half time it might have been a different game."