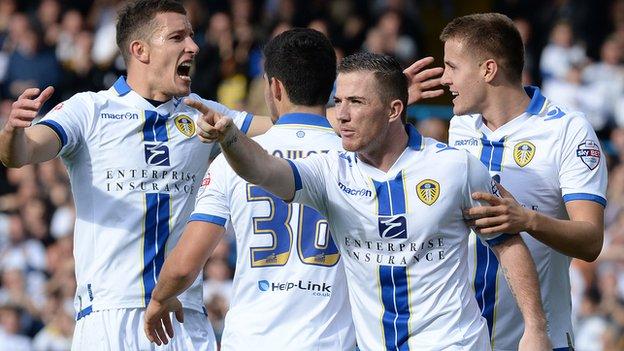 The striker struck from inside the area early in the first half to open the scoring, before Cameron Stewart equalised with a shot from distance.

A McCormack penalty put Leeds ahead again, but a close-range Johnnie Jackson finish made it 2-2.

But McCormack fired into the roof of the net to complete his hat-trick, before rounding off the scoring with a free-kick.

Heavy rain earlier in the day had caused the kick-off to be delayed until 15:30 GMT, with turnstiles not open to supporters until one hour before.

Charlton had not conceded in more than seven hours going into the game and they showed some promise early on when Callum Harriott curled an effort wide.

But the visitors took the lead when Dexter Blackstock played a ball into the path of McCormark and the striker calmly slotted beyond home keeper Ben Hamer.

Charlton pressed for an equaliser and were level on the stroke of half-time when Jackson's free-kick was curled into the area, and though it was headed away, the ball fell to Stewart, who struck a volley beyond Paddy Kenny.

Leeds were back in front, though, three minutes after the break when Danny Pugh was fouled inside the area by Harriott and McCormack blasted the penalty into the roof of the net.

The game swung from one end of the pitch to the other and Charlton were level again when Simon Church got the better of two defenders and crossed towards the near post, where Jackson finished.

But no sooner had the Charlton fans finished celebrating that goal, Leeds regained the lead when McCormack volleyed home. He then grabbed his fourth by curling home a superb free-kick.

Charlton manager Chris Powell: "It was a strange game because for 70 minutes we were well in there.

"But McCormack showed his quality. Conditions play a part but you have to be very diligent when you are defending in your own box.

"We showed some character to come back but McCormack was the major difference in the end between two well-matched teams."

Leeds manager Brian McDermott: "We've been trying to find the best position for Ross because if you give him chances he will score.

"I'm delighted for him because when they pulled it back to 2-2 it could have gone either way.

"Is he good enough for the Premier League? Absolutely. But we won't worry about that yet - hopefully he can keep doing that for us."