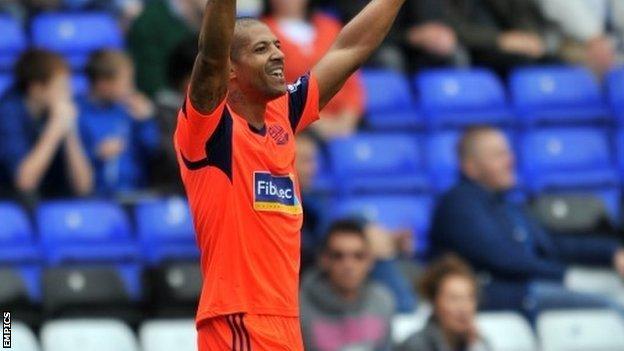 First-half goals from Rob Hall and Jermaine Beckford helped Bolton record their first home win of the season against Millwall.

Hall scored the first when he slotted in following a good move, before Jermaine Easter fired in the equaliser from Shane Lowry's pass.

Beckford then chipped David Forde to put Bolton back in front two minutes before the break.

Andre Moritz scored a late third when he smashed home from inside the area.

Wanderers opened their league campaign with a 10-game winless run, but now have their third win in five.

Despite David Ngog scoring in last week's win at Bournemouth, Bolton manager Dougie Freedman opted to start Hall in place of the ex-Liverpool striker in the only change to his starting line-up.

Liam Feeney, who recently returned to Millwall after a loan spell at Bolton, featured on manager Steve Lomas's bench, with Justin Hoyte making his debut after signing on loan from Middlesbrough.

Hall looked dangerous from the off and forced a smart save from Forde after a dazzling run into the box in the fourth minute. Just a minute later, the Wanderers winger then broke the deadlock.

Neil Danns played the ball into Beckford, who produced a delightful flick to Chung-Yong Lee. The South Korea international then found Hall, who stroked the ball past Forde into the bottom right corner to complete a well-worked team goal.

Hall then taunted the travelling Lions fans - and that was not the only thing the visitors were aggrieved about.

At the time of the goal, Nicky Bailey was taken off the pitch after a head injury and was not allowed back on until after the ball was in the back of the net.

Millwall levelled in the 28th minute as Lowry slid a ball into Easter's feet in the penalty area. Easter then calmly controlled the ball and slotted past Andy Lonergan for the equaliser.

The Bolton fans in the Reebok thought their team had regained the lead moments later. Beckford hit a ball on the bounce which looked to have gone in but just hit the side-netting.

But the Jamaica international was consistently given the space to run in behind by the Millwall defenders. Two minutes before half-time, he punished them.

Tim Ream produced a sublime defence-splitting pass to Beckford, who chipped over Forde to put them back in front.

Beckford and Hall were replaced in the second half, but Bolton continued to be a threat on the counter and Moritz's late goal epitomised that as the Brazilian midfielder stepped over past the backtracking Lions defenders and rocketed the ball past Forde to complete the victory.

"It's not a relief but I felt that a win was crucial today. It's important to get that first home win but I think that the majority of performances at home have been good recently.

"We've put behind us some bad form at the start of the season which we didn't shy away from because we knew there were areas where we could improve.

"I feel if we can keep our feet on the ground we will start to really pick up points and move up the division."

"We showed resilience to get back in the game but we shot ourselves in the foot conceding that goal just before half-time.

"We're not far away but we need to tighten up at the back or you're not going to pick up results in games like this."