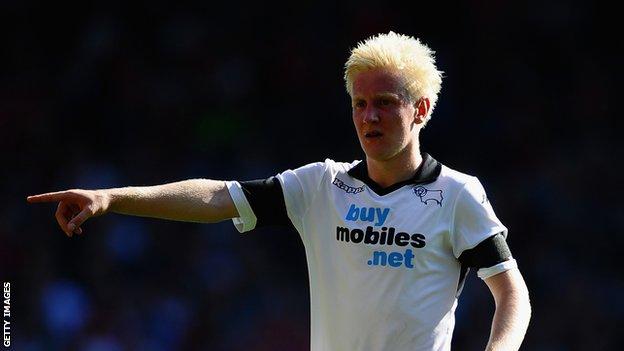 Derby moved up to ninth in the Championship with a comfortable win over struggling Sheffield Wednesday.

Jake Buxton put the home side ahead just before half time with a close-range finish.

Highly-rated midfielder Will Hughes added a second shortly after the restart when he slotted in Craig Forsyth's low cross at the far post.

Chris Martin then turned home Jamie Ward's cross to condemn Wednesday to their fifth defeat of the season.

The result was rarely in question after Derby quickly took a grip of the game and went close when a deflected Craig Bryson free-kick went narrowly wide.

Simon Dawkins dragged a shot wide of the Owls goal when well-placed before Derby finally broke the deadlock just before half-time.

Buxton headed in a Ward corner and, shortly after the break, Derby doubled their lead.

The Rams made the most of a swift counter-attack, with Hughes applying the finishing touch as he stole in at the far post convert Forsyth's cross.

England Under-21 international Hughes then played a part in Derby's third as he released Ward, who crossed to set up Martin for a simple tap-in.

Derby handed a debut to Mali international midfielder Kalifa Cisse, 29, after he signed on non-contract terms following a successful trial.

Derby manager Steve McClaren: "This was one of those happy Saturdays when everything you have done in the week works out the way you want.

"There were times when it was simply beautiful to watch.

"The quality of the football for the second and third goals was fabulous and it all stemmed from having the right balance and attitude."

Sheffield Wednesday manager Dave Jones: "Unfortunately, far too many of our players lost their personal battles. Too many seemed to think that after putting five Past Reading a week ago we only had to turn up for it to happen again.

"I am as angry as I have been in a long time. Derby didn't have to earn it, we gave it to them.

"There was a complete absence of communication for their second and third goals. Derby were allowed to walk the ball into our net."