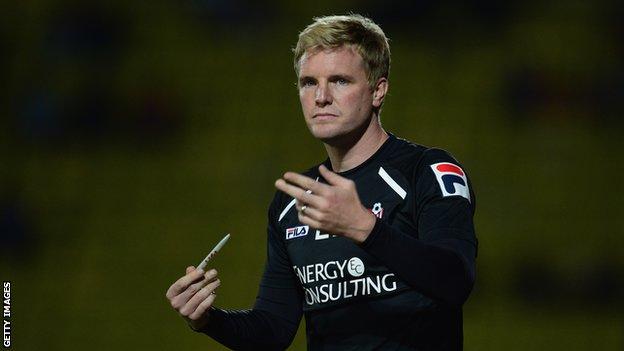 Tokelo Rantie had given Howe's Bournemouth the lead from 25 yards to leave the Clarets facing only their second defeat.

It was a high-tempo start at Turf Moor with both sides setting their stalls out in the early exchanges, Brett Pitman going close for the visitors in the third minute with a deflected drive that Burnley goalkeeper Tom Heaton did well to tip over.

Sam Vokes then went close for the home side, heading over a David Jones free-kick at the far post.

Burnley captain Jason Shackell saw his header hooked off the line by Pitman in the 23rd minute as Sean Dyche's team looked to press home their advantage.

Despite being under pressure for much of the first half, it was Howe's side who drew first blood four minutes after the restart.

The lively Rantie turned his man 25 yards from goal before unleashing a drive that cannoned in off the crossbar leaving Heaton with no chance.

Dyche shuffled his pack on the hour mark by introducing Treacy and it almost brought about an immediate impact but the Irishman could only direct his header at Camp.

The Bournemouth keeper breathed a sigh of relief five minutes later when Vokes' shot almost slipped in at the near post after the Welsh international sprang the offside trap before going wide.

Referee Michael Russell then infuriated the home fans by turning down penalty shouts after Elliott Ward appeared to shove Ings as the striker looked to steady himself on the edge of the box.

The Clarets continued to push but they were frustrated until Ings headed home six minutes from time.

Substitute Junior Stanislas lofted in a measured ball which Vokes flicked on for his strike partner to nod past a hesitant Camp.

Treacy almost hit what would have been the winner two minutes later but his free-kick from the edge of the box was clawed away by Camp.

"I was really happy with the way we kept going to force a point.

"Tom [Heaton] has hardly had a save to make. He had one in the first half which was for the cameras and a good take from one slung in from 35 yards so there were good signs.

"It's hard because teams come here and they want to do well. There is a mild tinge of disappointment but I've told them that they're top of the league, they've taken 26 points out of 30 so I said I wouldn't be too disappointed."

"I think when you're 1-0 like we were with the time left in the game you're disappointed not to win but I thought it was a really honest game between two really honest teams.

"Burnley play very aggressively on the front foot and put a lot of long balls into your box and you have to defend them and I think if there has been a criticism of us this season it has been defensively in the area but I thought we responded very well here.

"We scored a terrific goal and with the time left we were hoping we could win it."