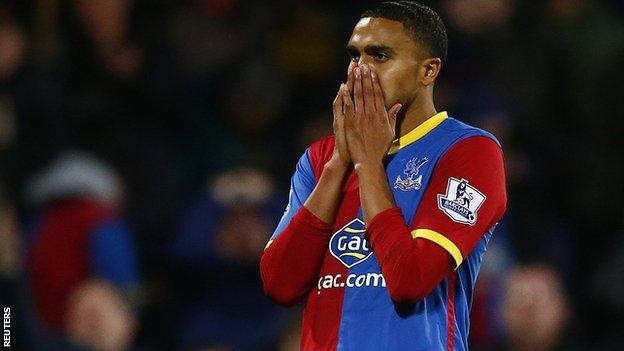 Managerless Crystal Palace picked up their first point in eight league games but were left to rue a number of missed chances against Everton.

The home side went close when Kagisho Dikgacoi mis-timed a free header while Jerome Thomas had a shot tipped over.

Palace striker Marouane Chamakh headed wide when well placed before Thomas sent a chip into the side-netting when clean through on goal.

Palace, who remain bottom of the Premier League and five points from safety, had appointed Iain Moody as their sporting director before the game and co-chairman Steve Parish said the club hoped to appoint a new manager next week.

Whoever does take over will assume control of a team who are tireless in terms of their work-rate but one which needs extra quality and ruthlessness in front of goal.

However, the Eagles should have gone into the break in front but for some poor finishing.

"The threat of Romelu Lukaku was pretty well contained by Danny Gabbidon and Damien Delaney. It was a thoroughly enjoyable game. It felt like a victory for Palace. The Palace players put in a huge shift. It's at least a little bit of light at the end of the tunnel."

First Dikgacoi evaded his marker to meet a Thomas cross but the midfielder's header ended up being more of a clearance than an effort on goal.

Thomas was back in the action again when his long-range shot was tipped over by goalkeeper Tim Howard at full stretch, moments before Chamakh sent a powerful header wide from Barry Bannan's cross.

Palace's regret at those missed chances increased when they wasted a glorious second-half chance.

Thomas was played clean through on goal - beating the Everton offside trap - but the ex-West Brom winger's effort saw him chip Howard and find the side-netting from the edge of the box.

The home side almost paid the price for their profligacy when Eagles striker Cameron Jerome inadvertently flicked on a corner which Jagielka headed against the crossbar.

Palace had to endure some tense moments before the final whistle but managed to hold on and end a run of seven straight Premier League defeats.

You can check out the best photos from Saturday's Premier League action on the BBC Sport Facebook page.

"I'm proud of the players. Everton had a lot of possession but we created the better chances.

"If I'm being greedy we should have taken all three points but a draw gives us something to build on.

"The fans were fantastic and you could see the spirit of the players. I couldn't ask anymore of the players apart from finishing the chances we had.

"I would be more concerned if we weren't creating chances. Tactically we have been in a lot of games this year but key moments have cost us."

"We couldn't find that little bit of sharpness in the final third.

"Overall, we probably allowed ourselves to get a bit frustrated. Every time the ball went out of play it took ages to come back in.

"It was a stop-start sort of game and we couldn't get in a position to break them down.

"They were very well organised, worked extremely hard and made it very difficult."