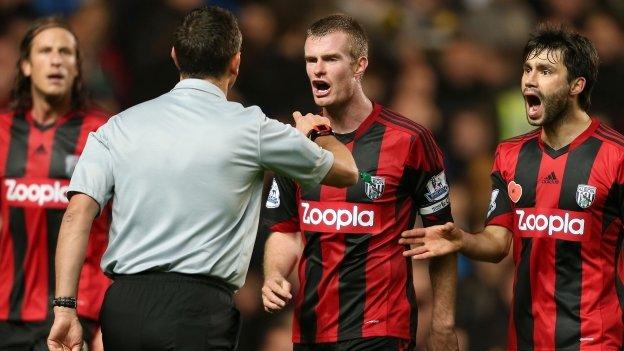 Hazard maintained his composure to score after Steven Reid had been penalised for a collision with Ramires, who appeared to go to ground easily.

The hosts took a half-time lead when Samuel Eto'o pounced from close range.

But the Baggies fought back superbly through Shane Long and Stephane Sessegnon before the late drama.

The penalty was awarded by referee Andre Marriner in the fourth and final minute of stoppage-time for what appeared a relatively innocuous coming-together between Ramires and Reid.

And after Hazard had sent the impressive Boaz Myhill the wrong way, there was a fracas between the rival players as West Brom made their anger clear.

But if it was a cruel ending for the visitors, who were seconds away from their first victory over Chelsea at Stamford Bridge in 30 years, it was a redemption of sorts for Hazard.

The Belgian had been restored to the starting line-up after being dropped in midweek for arriving back late from a trip to watch his former club Lille.

And he justified his manager's faith with an energetic performance and a nerveless spot-kick that extended Mourinho's run of home Premier League matches without defeat to 66.

A victory for the Baggies would have represented a coup for their manager Steve Clarke, who was Mourinho's assistant during his hugely successful first stint at the club.

And the Scot's well-drilled outfit looked comfortable as they kept Chelsea at bay for almost the entirety of an uneventful first half.

However, just when the Blues fans were starting to give voice to their frustrations at a stuttering display, the opening goal arrived.

When Myhill parried Hazard's fierce shot from the left, Eto'o punished a dithering Liam Ridgewell at the far post to poke home his fourth goal for the club.

Chelsea went up a gear at the start of the second half and Hazard fluffed a chance to double Chelsea's lead when he failed to control an exquisite long pass from Oscar.

The one-way traffic was reversed when West Brom almost snatched an equaliser on the break.

An accurate cross from Morgan Amalfitano located Long, whose powerful header from the penalty spot struck the foot of the post.

If the opportunity was a warning to Chelsea of Long's aerial prowess, it went unheeded.

Further Albion pressure earned a corner from the right and when Gareth McAuley's header was pushed into the air by keeper Petr Cech, Long leapt above a crowd of Chelsea players to nod home.

Amazingly, there was more to come from the visitors. Sensing vulnerability in their illustrious opponents, West Brom poured forward and were rewarded with a second goal.

Ridgewell picked out Sessegnon, who side-stepped John Terry and cracked off a shot which somehow squirmed under the body of a flat-footed Cech.

Chelsea responded with a characteristic onslaught, but Myhill showed excellent reflexes to turn aside a low drive from Ivanovic before Willian headed over.

The Blues remained vulnerable though and almost suffered a fatal wound when Chris Brunt ran from inside his own half but could only shoot over with team-mates well placed.

However, with Chelsea fans streaming towards the exits, the Blues were handed a last-gasp opportunity to claim a point.

Running at pace with the ball inside the area, Ramires appeared to lean into Reid before hitting the ground.

The collision was enough to convince Marriner to point to the spot, and Hazard stepped up to secure a vital point for the London team.