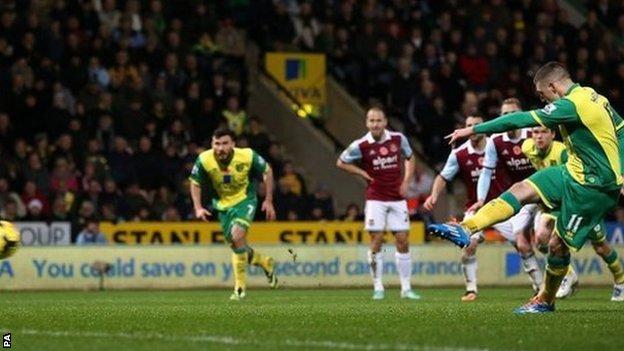 A trio of second-half goals moved Norwich City out of the relegation zone and above 16th-placed West Ham to ease the pressure on manager Chris Hughton.

Gary Hooper scored his first league goal for Norwich from the penalty spot after Jussi Jaaskelainen's foul, before Robert Snodgrass curled in a free-kick.

Leroy Fer secured Norwich's third win of the season with an injury-time goal, slotting in from 18 yards.

Prior to Saturday's 3-1 home win over West Ham, Norwich had not scored more than once in the Premier League since their opening day 2-2 draw with Everton.

The Hammers looked like they were going to make it a miserable evening for Hughton after a dominant first-half display but Jaaskelainen's 54th-minute error turned the game in Norwich's favour.

The Finland goalkeeper sent Hooper tumbling after dropping a comfortable-looking cross and the former Celtic striker emphatically levelled from the spot.

From there Norwich, who were poor before the break, took control and a first Premier League goal of the season from Snodgrass and Fer's individual late effort capped a rousing second-half comeback.

The defeat leaves West Ham with just two wins this season and just one point above the relegation zone, with Norwich a position and a point above them.

The Norwich fans would have been expecting a reaction from their side after last weekend's 7-0 thrashing at Manchester City but they did not initially get it as West Ham bossed the opening 45 minutes.

Former Newcastle boss Hughton has been quick to point out his side have already played Arsenal, Chelsea, Manchester City and Tottenham but Morrison's opener deservedly left his side trailing at the break.

In a spell of concerted pressure, the visitors went close on 13 minutes when Guy Demel's powerful header cannoned off the bar to safety.

Sam Allardyce's side were now in control and Morrison rewarded their dominance on 32 minutes, converting Kevin Nolan's pull-back from close range after Razvan Rat's left-wing cross had caused problems.

After being gifted a route back into the game by Jaaskelainen, Norwich looked a different side as Jonny Howson hit the bar from 25 yards before Snodgrass brilliantly curled the hosts ahead on 72 minutes.

And their second-half control was rewarded when Fer finished low into the net after breaking from from midfield.

Norwich manager Chris Hughton: "It's a bit of relief. The level of performance has not been that bad. On the back of some difficult results against the Manchester clubs there was some nervousness.

"We told the players we have to build on this. We had a similar start last season. We beat Arsenal and that was a bit of spring for us to go on to better things and let's hope that this is the same.

"We'll enjoy it during the international break but we'll look forward to playing Newcastle in a few weeks."

"When we got the first goal today I thought the lads would be the same as they have been all season. But we've capitulated with our own errors.

"We should have picked up a win on the balance of play. We've only got ourselves to blame and I didn't expect that error from Jussi Jaaskelainen. We needed that clean sheet and didn't get that.

"I warned the players that Chris Hughton would change something and try to shut us down more. At the end of the day we lost was because it was such an unusual error. It killed the players and played on their minds."