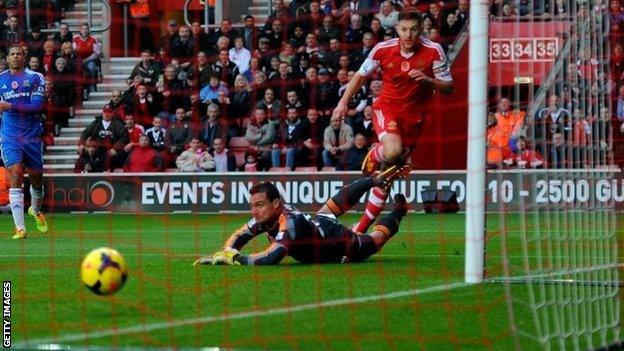 Adam Lallana scored an individual goal of the highest quality as Southampton moved up to third in the Premier League with a convincing win over Hull.

He celebrated his England call-up with a wonderful solo run 30 yards from goal and precise finish.

Morgan Schneiderlin headed in the first before striker Rickie Lambert scored a penalty and midfielder Lallana added the third.

Yannick Sagbo pulled one back for Hull before Steven Davis drove in for 4-1.

It was deserved fourth goal for the side, who under manager Mauricio Pochettino look like a team that could challenge for a European spot this season.

They now have away fixtures at Arsenal and then Chelsea, which will serve as a better indication as to where the Argentine's side rank among the Premier League hierarchy.

The Saints were excellent before the break and took the lead in the 16th minute when midfielder Schneiderlin arrived late to nod in after Lambert rose above his marker to head Nathaniel Clyne's right-wing cross back across goal.

They were 2-0 up at the half-hour mark when Hull keeper Steve Harper made an uncharacteristic error of judgement by rushing out of goal and scything down Lallana in a race for the ball.

Referee Phil Dowd booked the former Newcastle player, who was then left rooted as Lambert smashed the ball high into the net.

The moment of the match came just before half-time. Lambert played the ball back to Lallana 30 yards from goal, who left his marker with a Cruyff turn before shifting down the left and into the area where he calmly slotted in from a tight angle. It was a sensational goal and was witnessed by England coach Roy Hodgson.

Hull were awful during that period, but improved after the break. They got on the scoresheet 10 minutes after the restart when Southampton's Victor Wanyama - who was not playing with his team's confidence - was dispossessed by Jake Livermore. The midfielder, on loan from Tottenham, played the ball square to Sagbo, who drilled low past Artur Boruc.

That was one of the few lapses of concentration from Southampton, who were jolted back into action by that strike.

They twice could have added a fourth soon afterwards. First, Lallana exchanged passes with Lambert before forcing a one-handed save from Harper and then Schneiderlin's goal-bound drive was brilliantly blocked by David Meyler.

But with two minutes of the match remaining they did breach Hull's defence once more when substitute Davis swept in Clyne's pinpoint delivery.

"I want to congratulate all of my players. They put in an amazing performance - all of them.

"I hope all the players that got called up to their national sides get the chance to play. It would be great for them.

"I think they all have amazing potential, they just all need to keep on developing their football, they all need to keep progressing as football players and playing for their national sides will give them that confidence and chance to perform at a higher quality."

"Sometimes you should hold your hands up and say you were beaten by the better team.

"You can see why Southampton are up there and why they have three of their players in the England squad.

"In the first half they made it very, very difficult. Congratulations to them.

"The better team almost blew us away today - you can see they are at top end of their division."