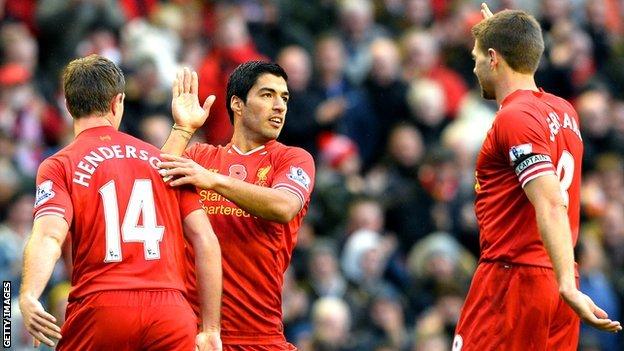 Luis Suarez, once again, provided the spark for Liverpool as he scored his seventh and eighth goals of the season.

The win lifted the Anfield club into second place in the Premier League table, two points behind leaders Arsenal, who have a game in hand.

Fulham were never in this from the moment Brendan Rodgers's side took a first-half lead thanks to an own goal by Fernando Amorebieta. Martin Skrtel's thumping header doubled the lead and Suarez fired in the first of his two goals before half-time.

The Uruguayan added Liverpool's fourth with a rising shot 10 minutes into the second half, to leave Fulham fans streaming for the exits with their side just two points above the relegation zone after a third straight defeat.

Jol says he does not fear the sack but this result will only increase the speculation regarding his future. Just when Fulham needed pace, purpose and passion, his side produced a performance that lacked all of those qualities. They were insipid, not inventive.

It could have been far worse. That it wasn't owed much to Fulham goalkeeper Maarten Stekelenburg, who denied Liverpool certain goals on at least three occasions.

This was, of course, never going to be an easy task for Jol's side. Fulham have won just once in 33 visits to Anfield.

Actor Mike Myers, of Austin Powers and Wayne's World fame, watched on from the second row of the directors' box as his beloved Liverpool produced a command performance of their own.

Jol will not have seen the funny side. Liverpool's starring cast lead the way, with Philippe Coutinho instrumental and Steven Gerrard tremendous throughout. This was a truly decisive response to a 2-0 defeat by Arsenal last Saturday.

Liverpool have now scored 16 goals in six league games since Suarez returned from a 10-game suspension, with the Uruguayan and Daniel Sturridge grabbing 12 of them - more than the Fulham team combined have scored this season.

Dimitar Berbatov was, once again, a peripheral figure, isolated and alone as the target man. Steve Sidwell and Scott Parker fought hard but were off the pace throughout.

The visitors had held firm until the 26th minute. But once the floodgates opened, there was an inevitability about the outcome.

Liverpool's opener owed much to fortune as Amorebieta inadvertently headed beyond his goalkeeper. Gerrard's excellent free-kick had been headed on by Suarez only for the ball to deflect off Daniel Agger and then Amorebieta on its way in.

Three minutes later, Liverpool went further ahead with Amorebieta at fault once more. Skrtel lost the Fulham defender all too easily and found space to guide Gerrard's pin-point corner beyond Stekelenburg with a thumping header.

Liverpool added a third before half-time. This time Suarez finished a flowing move that began with Gerrard and featured a slide-rule pass from Henderson. The Uruguayan looked up and fired the ball low beyond the Fulham goalkeeper in one fluid movement.

The Reds might have had two more within three minutes of the restart, but they did not have to wait long for their fourth as Fulham threatened to fall apart.

Gerrard burst forward and played another delightfully weighted pass through to Suarez, the striker considered squaring it before unleashing a thumping shot that flashed beyond Stekelenburg and into the net.

With the contest over, the game fizzled out during the final 30 minutes with referee Mike Jones waving away Henderson's claims for a penalty. It mattered not to Liverpool but Fulham left Anfield with much to ponder.

"Our appetite for the game was outstanding. Luis Suarez is a star talent but his core ingredient is his workrate, which is something we're trying to have throughout the team.

"He covers and presses and is a good talisman. Our quality was very good. At half-time I said I wanted us to be relentless, to keep pushing.

"But our intensity was outstanding after the first whistle. We saw today as a very important game, and we made an excellent start. Home games are important, so it was a good victory for us."