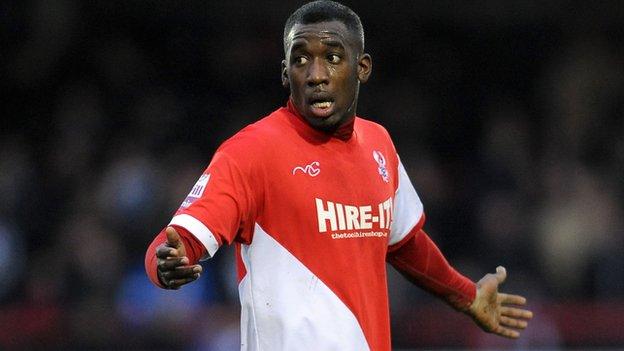 Kidderminster Harriers scored a goal in each half to win for the first time in six Conference Premier games and keep alive their play-off hopes.

Morgan-Smith, who came off the bench to score twice and rescue a point in Saturday's 2-2 home draw with Braintree, took his tally to eight goals for the season.

Harriers' first league win since manager Andy Thorn's first game in charge on 11 January lifted them back within three points of the play-off zone, ahead of Saturday's trip to second-placed Cambridge United.

A return to winning ways on the field came on top of the revelation earlier in the day that the club had suffered their third boardroom departure in four days.

John Davies, owner of Hire-It, the club's sponsor, has resigned, following the lead set by chairman Mark Serrell and his wife Ruth on Saturday evening.

"We really deserved the points. It was difficult on Saturday but hopefully we have put that to bed now. The support we had tonight was absolutely phenomenal.

"It helps when you get off to the start we did. We really came out of the traps flying. There were about 12 passes before it ended up in the back of the net.

"Woking came back into it as you might expect but, with our commitment and work-rate, we were a threat all night. Everybody saw how could we can be as an attacking threat."

"It's always disappointing when you lose a game and I thought in the first half we were the better side, but certainly didn't do enough second half.

"We played quite well first half without testing their keeper with the chances we had, so that was the biggest disappointment, we had three good chances and the keeper didn't make a save."

"We've been inconsistent all season, nothing's changed and that is what we are looking for."