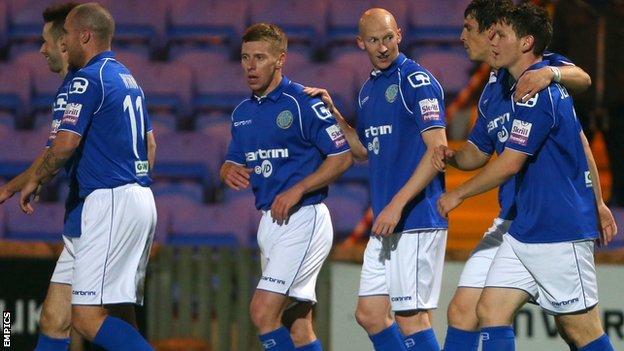 Connor Jennings struck a brace as Conference Premier side Macclesfield knocked League One Swindon out of the FA Cup for the second consecutive year.

Jennings opened the scoring when his turn and shot found the bottom corner.

Scott Boden doubled the lead when he latched onto a through ball and slotted into the corner before Jennings's super close-range finish made it three.

Peter Winn's point-blank strike rounded off a convincing victory for the non-league side who move into round two.

The home side started brightly and only a full stretch save by Tyrell Belford from Danny Rose's effort prevented the Silkmen from taking an early lead.

Macclesfield remained in control and deservedly went in front as the lively Jennings struck his first after good work from Boden.

The Robins had Belford to thank for keeping them in the tie as he denied Jennings with two excellent saves before the end of the first half.

Swindon started the second period much better, but despite dominating possession, they failed to muster a significant effort on goal.

And when Boden got in behind the visitors' defence to make it 2-0 against the run of play, the hosts sensed a famous win.

Jennings completed an impressive individual display with a neat finish after Andy Halls's fine lay-off, and the result was secured when Winn took advantage of a defensive error to fire home the fourth.

Victory for Macclesfield, over a side 55 places above them on the football ladder, was their seventh in the last nine games and maintains their unbeaten record against Swindon in the competition.

"We have to digest it and we have to try and be constructive.

"They're a group of young players but they can't keep using that excuse. They've got to start taking responsibility, stop hiding behind myself. It's happened too many times now.

"Full credit to Macclesfield, they deserved to win the game. They were very good.

"The goals we conceded were ridiculously poor. Apologies to the supporters that were here, it wasn't good enough."