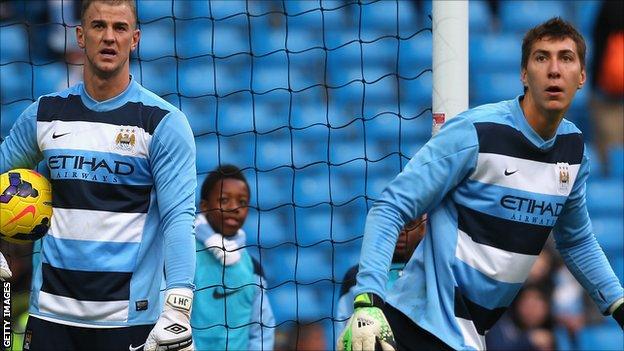 Hart, 26, was named on the bench, with understudy Costel Pantilimon his replacement City won 7-0 at the Etihad.

"Joe needs a rest and it will be useful for him," Pellegrini told BBC Sport.

But former England goalkeeping coach Ray Clemence says he would have liked Pellegrini to persevere with Hart.

"I would have liked Pellegrini to have stuck with Joe, but I understand football is about winning," Clemence, who last week retired from the Football Association, told BBC Radio 5 live's Sportsweek programme.

Hart's place in the City side had come under pressure after a number of errors in recent games.

They included mistakes in City's Champions League defeat by Bayern Munich in October and in England's victory over Scotland at Wembley in August.

Pellegrini admitted last month that he had considered dropping Hart for their home victory over Everton.

Pantilimon, also 26, played in Wednesday's Capital One Cup win against Newcastle. and kept his place after a performance that included a fine stop to deny Shola Ameobi in the first half and another to thwart Papiss Cisse in extra time.

Joe has had a difficult time. I'm positive he will be back stronger and better

"I thought about this the whole week," added Pellegrini.

"It was not easy to take this decision. Last time I was in doubt before the internationals but I thought that moment it was important to trust in Joe because the England team also needed him.

"At this moment we need a change. We are all behind him and try to recover him as soon as we can.

"I think Joe is a very important player, he is a great goalkeeper but everyone can have a bad moment in their career. He has it at this moment and I am sure he will improve with a bit of a rest."

Clemence, who coached Hart while at England, admits the keeper has not been at his best but feels he can cope with the disappointment of losing his place.

"Joe has had a difficult time," he said. "I'm positive he will be back stronger and better.

"The most important thing for Pellegrini is not Joe Hart and England but it's Manchester City and he has to put out a team that he feels can win the game."

Ray Clemence at a glance

Clemence, who won 61 England caps between 1972 and 1983, added: "Knowing Joe as I know him he is a very strong character and he will know that for a number of weeks he has not been at his best.

"He now has a chance to work on the training ground, not under the same pressure, and when the opportunity comes - and it will come - he will come back the keeper we saw a year ago.

"That is the perils of being a goalkeeper. If you do lose your place it takes time to get back in and after a 7-0 win I don't envisage a change."

Pantilimon had little chance to make an impression against a tame Norwich, who barely threatened throughout.

Instead, it was Manchester City who did almost all of the attacking and had put the game beyond the visitors with four goals in 20 first-half minutes.

Bradley Johnson's own goal put the hosts ahead before David Silva, Matija Nastasic and Alvaro Negredo were on target.

Yaya Toure scored a free-kick in the second half before Sergio Aguero and substitute Edin Dzeko also scored.

The win was Manchester City's biggest in the Premier League and moved them up to fourth in the table.

"It was a really good performance," added Pellegrini.

"The team played really well during the 90 minutes, not only the first half.

"Normally when winning 4-0 at half-time, in the second half a team finish or stop. But the team continued playing exactly the same and that's very important for me."