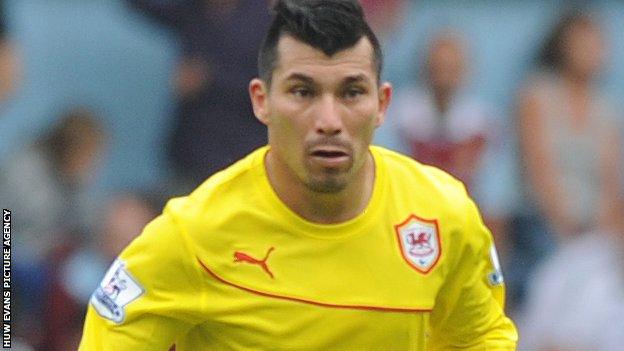 Andrew Taylor says team-mate Gary Medel is worth the £11m Cardiff City paid Sevilla for the midfielder in August.

Ahead of Sunday's south Wales derby, Swansea City defender Angel Rangel said Cardiff had paid over the odds for the Chile international.

But Taylor said he had taken Rangel's comments with a "pinch of salt" and insisted Medel was worth the fee.

"Gary Medel's a fantastic player [and] worth every penny in my eyes," defender Taylor said.

"He's experienced some big derbies as well so I'm sure he'll be able to handle the occasion.

"You take it with a pinch of salt. There will be a lot of things said by both sides. We don't read too much into that."

It's easy to think this is another game and it's just three points. But it isn't - it's a lot more than that

And during a Seville derby last season while playing for Sevilla, Medel was sent-off after slapping Real Betis player Jose Canas, now at Swansea.

Sunday's game at Cardiff City will be the first time the two sides have met in English football's top-flight.

It will also be Taylor's first experience of the south Wales derby and the left-back hopes the occasion does not get to the players and fans.

"It's easy to think this is another game and it's just three points," the former Middlesbrough and Watford player added.

"But it isn't - it's a lot more than that. There's a lot of hostility.

"I just hope that passion doesn't spill over and we'll have a good game, very entertaining for the fans."

Taylor, who joined Cardiff during the summer of 2011, hopes Cardiff will make the most of playing at home.

Cardiff's only league win at Cardiff City Stadium so far this season came in a memorable 3-2 victory over Manchester City in August.

"I think we will be able to use atmosphere, hopefully to our advantage [and] similar to what we did against Manchester City," Taylor said.

"They were fantastic that day and if they can be like that or better, it will be great for us and hopefully help us onto the win."