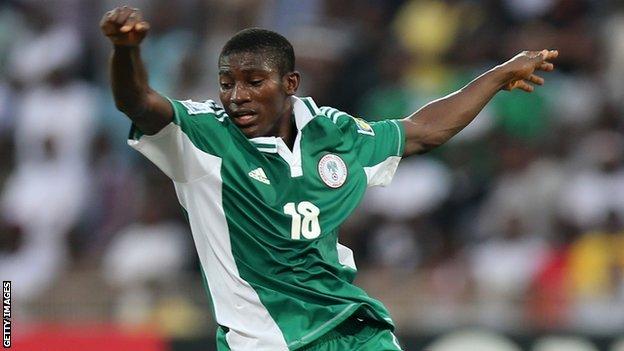 Taiwo Awoniyi scored both goals for Nigeria as they overcame Uruguay 2-0 in the quarter-finals of the Under-17 World Cup in the United Arab Emirates.

It means the Nigerians will now face Sweden in the last four on Tuesday as they bid for a record fourth under-17 title.

Awoniyi, deputising for the injured Success Isaac, scored his first on 18 minutes when he was put through with a pass from Kelechi Iheanacho, who has scored five goals at the tournament.

The Golden Eaglets place in the last four was sealed in the 79th minute when again Iheanacho managed to pull the ball across the face of the goal for Awoniyi to steer home for his second of the match.

Tuesday's game against Sweden will be a seventh Under-17 World Cup semi-final for Nigeria, who are the top scorers in the UAE now with a total of 20 goals so far.

The two sides clashed in the group stages in the UAE with honours even following a 3-3 draw.

Earlier in the day the Africa's other remaining representatives at the tournament, Ivory Coast, were knocked out after a 2-1 loss to Argentina in Sharjah.

The South Americans opened the scoring after just six minutes a Matias Sanchez cross found Joaquin Ibanez, who chested the ball down before firing past Seck Diabagate.

Argentina doubled their lead just after the half-hour mark of a disjointed match Rodrigo Moerira poking the ball over the line at full stretch from a corner.

The Ivorians pressed forward in the second half and scored with thirteen minutes remaining to give themselves a glimmer of hope Leandro Vega handling the ball in the area and that allowed captain Franck Kessie to convert the penalty.

Argentina now play Mexico in the semi-finals on Tuesday.

Africa's two other teams at the tournament were knocked out in the round of 16 with Morocco losing 2-1 to Ivory Coast while Tunisia were beaten 3-1 by Argentina.