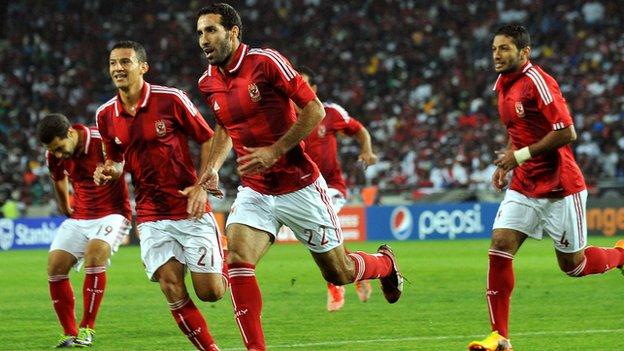 Hosts Orlando Pirates scored with almost the final kick of the game to earn a 1-1 draw with holders Al Ahly of Egypt in the first leg of the African Champions League final.

Mohamed Aboutrika's perfectly-placed freekick from outside the area on 14 minutes looked like it would be the winner in South Africa.

However Pirates, backed by a capacity and vociferous crowd, dominated for much of the match and were rewarded in the third minute of injury time when Thabo Matlaba scored an equaliser.

He found the bottom right-hand corner with a low shot that beat Sherriff Ekramy in the Ahly goal.

Ahly thought they had scored a second six minutes after half time as Ahmed Abdul Zaher raced into the area and put the ball into the net but he was controversially adjudged offside.

The hosts then picked themselves up and began to dominate once again and on the hour mark Andile Jali's low shot forced a great save from Ekramy.

The second leg of the final will be played in Cairo on 10 November with the overall winners also claiming a place at the Club World Cup that kicks in December in Morocco.