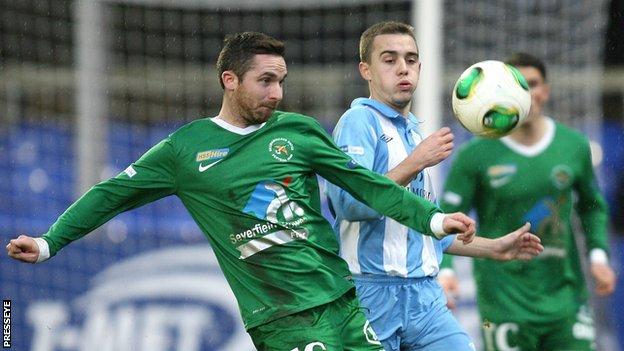 Warrenpoint Town and Ballinamallard United took a point apiece from an entertaining game at Stangmore Park.

Defender Darren King headed in from a Liam Bagnall corner on 18 minutes but substitute Jason McCartney fired home the equaliser in the 50th minute.

Stuart Hutchinson curled the ball inside the post and beyond the goalkeeper to put the Mallards ahead after 62 minutes.

Warrenpoint enjoyed the better of the first period as Stephen McCabe went close and Feargal Murphy saved from Hughes.

Ballinamallard's best chance of the opening half fell to Andy Crawford.

McCartney reacted quickly to score from the rebound after Hutchinson had been denied to level the game, before Hutchinson nudged the visitors in front.

The Hughes penalty drew Warrenpoint level but Mark Stafford could have won the game for Whitey Anderson's side when he headed over when well placed.