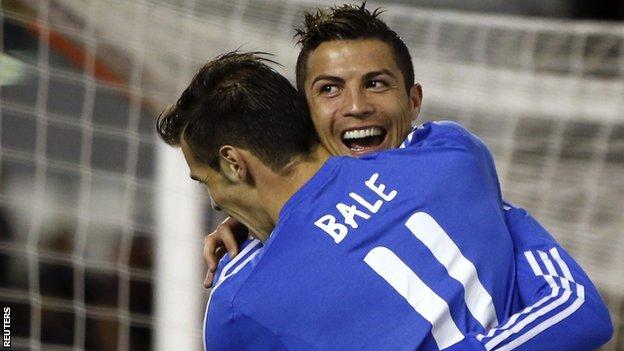 Real Madrid survived a second-half fightback by bottom side Rayo Vallecano to hold on to a nervy win.

A Cristiano Ronaldo double and Karim Benzema's goal put them 3-0 ahead on 48 minutes before two Jonathan Viera penalties in the space of three minutes left Real hanging on.

Visiting keeper Diego Lopez kept his side ahead as he tipped Alberto Bueno's shot on to the post on 65 minutes.

They are two points behind their Madrid rivals Atletico, who play their game in hand against Athletic Bilbao on Sunday.

It was a stirring performance from Rayo in front of their vocal fans and overshadowed the contribution of Real's world-record signing Gareth Bale, whose start in Madrid has been disrupted by injury.

The 100 million euro Wales winger followed up Wednesday's two goals and two assists in the 7-3 win at home to Sevilla with a cross for Benzema's headed second goal, before squaring for Ronaldo to complete his brace soon after the break.

The Portuguese had given the visitors a third-minute lead, with his tally now 33 goals in as many La Liga matches in 2013.

But, seemingly cruising, Carlo Ancelotti's men were stunned by the hosts' brave second-half efforts as Viera scored from the spot on 53 and 55 minutes following fouls by Pepe and Marcelo.

The hosts were earlier denied a first-half equaliser when midfielder Iago Falque, who is on loan from Tottenham, arrived at the far post to bundle into the Real net - but officials spotted that the ball hit offside team-mate Viera before going past Lopez.