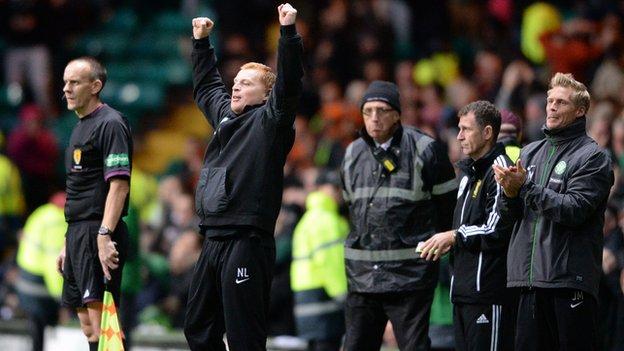 Neil Lennon insists Celtic are ready for the challenge of Ajax despite only rescuing a point in injury-time against Dundee United.

Charlie Mulgrew's header secured the Hoops a Scottish Premiership point ahead of their Champions League game in Amsterdam on Wednesday.

"It'll be a totally different team [against Ajax]," said Lennon. "We'll be a lot stronger going into the game.

"If we can replicate the performance in Milan we've got every chance."

Lennon hopes to have Mikael Lustig, Kris Commons, Beram Kayal and Georgios Samaras fit for their Group H clash against Frank de Boer's side, who Celtic beat 2-1 at home in October.

Dundee United were set for their first away win at Celtic Park in almost 21 years after Stuart Armstrong finished off a well crafted counter attack in the first half.

The hosts were profligate throughout and the match was 60 seconds away from being over before Mulgrew's third goal of the season meant their unbeaten league record this season remains intact.

"I took a gamble today with the squad because of Wednesday in mind. [I'm] delighted that we're unbeaten and I thought we got what we deserved out of the game.

"I know United had a great chance to make it 2-0, but we had three off the line first half and I don't know how many we had second half."

The United chance Lennon referred to was that of Brian Graham, who miscued a header from close range in the 64th minute.

Despite his confidence for the test awaiting them in the Netherlands, Lennon wants to address the poor finishing on display on Saturday.

"We need to improve in that final third," he said. "We're not clinical enough.

"We were poor with the final ball at times but I need people to get across defenders and get on the end of things.

"People just hoping someone else will do it and not taking responsibility - that's proving to be difficult for us at the minute, I don't know why."