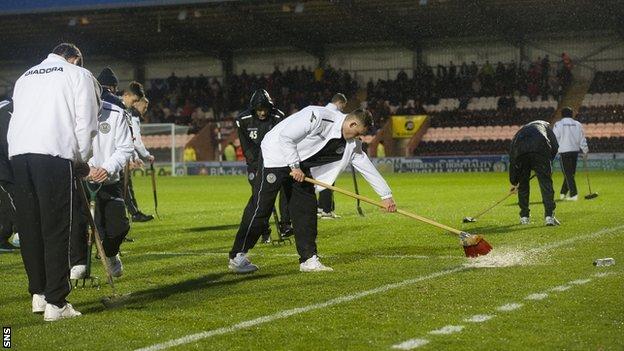 St Mirren chairman Stewart Gilmour expressed his disbelief that the game between his club and Ross County was abandoned due to a waterlogged pitch.

The Buddies were winning 2-0 in heavy rain when referee Willie Collum called off the match after 52 minutes.

"We've played football in a lot worse than this, and the pitch is fine, perfect," Gilmour told BBC Scotland.

"I saw Willie bouncing the ball on the pitch and it's bouncing two and a half foot - dropping it from head height."

Paul McGowan and Steven Thompson had given Saints a first-half lead but now the game will have to be replayed.

"I appreciate he [Collum] is trying to look after safety," added Gilmour. "I didn't see any problem with players' safety at all.

"I think we've all got our own opinion on it and I'm sure Ross County is different from ours. Certainly they were under a lot of pressure to put the game off."

The Highland side's manager, Derek Adams, admitted it had been a "difficult" day but felt the correct decision had been made to abandon the game.

It is the second successive game Ross County have had abandoned, following the power failure which meant the Highland derby against Inverness was called off at half-time.

"It looks like we're singing in the rain here," Adams told BBC Scotland.

"I don't want to say too much because I know how St Mirren must be feeling just now. They've got themselves in the lead at half-time and they must be bitterly disappointed.

"You can't do anything about it. It's difficult for the fans because they've paid good money to come here, they had to buy programmes and food as well, but from a footballing point of view it's the right decision."

Like chairman Gilmour, St Mirren boss Danny Lennon was frustrated to see what looked like a comfortable home win become null and void.

"We could have jumped a couple of places on the back of that," Lennon told BBC Scotland.

"I totally respect the referee's decision. He's put the safety of the players first and foremost which is most important.

"To be fair I thought we played through worse in the first half but it's a difficult decision the four officials have had to make.

"We'll take it on the chin and we'll have to be ready for the challenge next time it comes around."