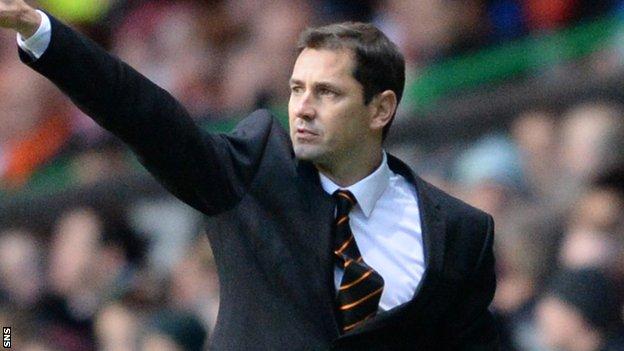 Dundee United manager Jackie McNamara praised the quality of his young side in , but felt the team deserved a win.

"I'm disappointed for the players," said McNamara. "I thought we were going to see it through.

"I'm disappointed with the lads for the effort they've put in - it would have been their first win here in 20 years."

Stuart Armstrong put United ahead shortly before the half-time interval at Celtic Park when he lofted the ball over Fraser Forster after latching onto Nadir Ciftci's pass.

Mulgrew popped up late in the game to head home an Emilio Izaguirre cross.

"You come here and 1-0 is a hard scoreline to defend at times," said McNamara. "You try to get that second goal.

"I'm disappointed at the timing of it, but I've said to the players it shows you how far they've come that they can get a 1-1 draw at Celtic Park.

"I thought we were comfortable and they had one good chance from Anthony Stokes, but Radoslaw Cierzniak had a fantastic save in open play - I don't think they caused us any problems in open play.

"You can see at set-pieces that's Celtic's main danger, coming across the box with the aerial threat they have."

The point keeps McNamara's side in the top six of the Scottish Premiership, five points off second-placed Inverness, but despite missing out on the chance to leapfrog fifth-placed St Johnstone, McNamara said he was content with how his young squad had performed.

"I'm proud at the way they went about their business today," added McNamara.

"It's important to have a good squad and a good togetherness.

"We had two teenagers in the back four, which bodes well for the future - they were playing against international quality, and they don't look out of place. They're learning every game and they'll get better."