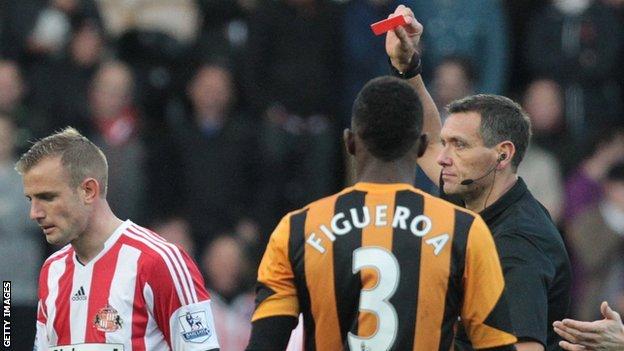 The Sunderland midfielder was sent off as his side finished with nine men in a 1-0 loss at the KC Stadium. Andrea Dossena was the other man dismissed.

"Thankfully he's not mine to manage anymore," he added when asked about Cattermole's foul on Ahmed Elmohamady.

Bruce managed the 25-year-old at both Wigan and Sunderland.

In 2010, Bruce warned the former Middlesbrough player that his career could be affected if he failed to improve his poor disciplinary record.

The former England Under-21 international's latest sending off was a straight red card for a challenge that split Elmohamady's boot.

"He's got to learn and I'm sure he will...eventually," added Bruce, after victory over his former club.

"One thing Lee's got to curb is that red mist that comes down. We know you can't make that challenge in today's football.

"In my day it might have been a booking but the directive is that if you leave the floor with studs showing, even if you don't make contact, it is seen as reckless and endangering the the player.

"The referee's got that one right and the second one [by Dossena] is a horror challenge, let me tell you.

"It was on David Meyler, who has had two serious injuries in his career, and he was lucky because those are the ones that really damage footballers.

"I don't know if you can get three red cards but he deserved them."

Although Sunderland manager Gus Poyet admitted former Liverpool player Dossena deserved to be sent off, he claimed Cattermole's challenge was not a red card.

The former Brighton boss criticised referee Andre Marriner for dismissing Cattermole, while failing to punish Hull's Paul McShane for a challenge that "could have killed" goalkeeper Keiren Westwood.

Republic of Ireland international Westwood, 29, had to be replaced in the first half after the challenge by McShane.

"I'm not accusing McShane at all," said Poyet.

"I think he played the ball and he was late but he nearly killed him and [Westwood] is injured and he is out and I need to change my goalkeeper.

"The tackle of Lee didn't touch [Elmohamady]. He was still on the pitch and he was down for two minutes - there's a little bit of a difference."

Sunderland's defeat at Hull was their eighth in 10 league games and leaves Poyet's side 19th in the table, five points from safety.