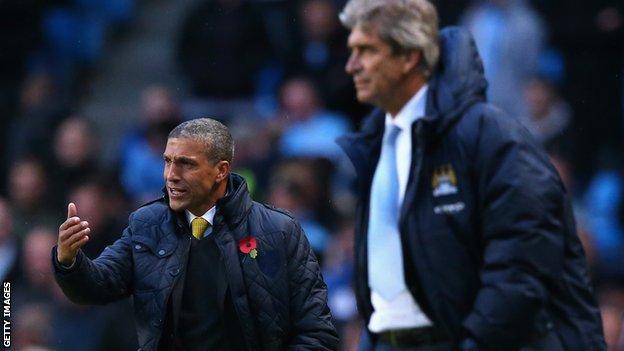 Norwich boss Chris Hughton said he was hurting after his side's 7-0 defeat by Manchester City and accepted he and the players had let the fans down.

The Canaries were 4-0 down by half time, before second-half goals by Yaya Toure, Sergio Aguero and Edin Dzeko condemned them to their worst top-flight defeat.

"It is hurting at this moment," Hughton told BBC Sport.

"We have let down the supporters who have travelled to Manchester."

Norwich are in their third successive season in the Premier League, after being promoted from the Championship in 2011.

They finished 12th in their first season back in the top flight, and followed that up by finishing 11th in 2012-13.

But they have struggled so far this term, winning only two of their first 10 games and are third from bottom with eight points.

Even more concerning for Hughton is the fact Norwich have now conceded 15 goals in their last four games, scoring only once.

"It was difficult from start to finish against Manchester City," he added.

"We knew the quality they had and they showed that today, but you have to be resilient and you cannot concede the goals we did. By our standards they were too soft, except the Yaya Toure free-kick and one that was offside.

"I hope it is a one-off but there have been a couple of games of late where we have conceded goals. We need to address it as soon as possible."

The defeat was Norwich's third in their last four Premier League games, but Hughton believes he can turn the club's poor form around.

He said: "I have confidence in my own ability and in the changing room.

"We need to put it to bed as quickly as possible and be far better next week [against West Ham]."