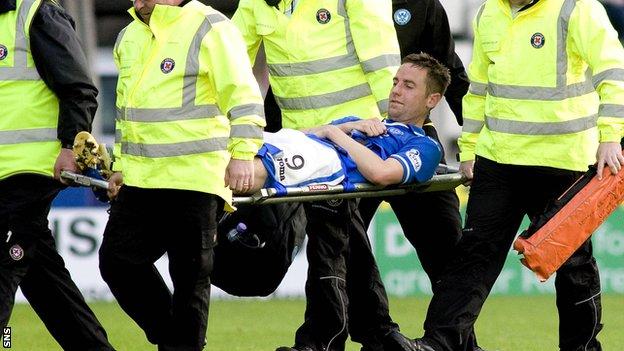 Steven MacLean will see a specialist next week, after his two rivals for a St Johnstone starting place secured a win over Hearts.

The 31-year-old striker has missed Saints' last three games after picking up a knee injury against St Mirren.

He was expected back in the squad for the game won through goals by Nigel Hasselbaink and Stevie May.

"Until he trained yesterday, he was close, but he's got to see a specialist on Monday again," said Wright.

Prior to May's ninth goal of the season, there had been speculation that the Scotland Under-21's form could lead to a call-up to the full international squad to be named by Gordon Strachan on Monday.

We were solid at the back, with some really good performances and I thought David Wotherspoon was immense

Wright does not expect May, who celebrates his 21st birthday on Sunday, to be in the party for the friendlies against the United States and Norway.

"I think it might be too early for him," said the St Johnstone manager.

"I expect, given another three or four months playing at that level, Gordon will look at it."

Wright is pleased with the growing understanding between May and Hasselbaink, for whom it was a third goal in four games.

"It's a nice wee partnership and Nigel is a handful," said the St Johnstone manager of the Dutchman.

"When you get the ball into his feet in that last third, defenders are wary of him, he has good feet and good body strength as well.

"They are a slightly different partnership than Stevie and Steven, but it's one that's blossomed over the last couple of games."

However, the Bosnian has had to sit on the sidelines, with Wright happy with his stand-in pairing in central defence.

"We've signed Sanel and we can't get him a game because of the form of Dave Mackay and Tom Scobbie and all the back four have done extremely well," said the manager.

"We were solid at the back, with some really good performances and I thought David Wotherspoon was immense."

Wright had made a surprise change to one of Wotherspoon's midfield partners and was delighted with the way it worked out.

"Murray Davidson came in for Paddy Cregg, who has been doing well, but we just thought he was suited to this game and I thought he did very well as well," he added.

"So I'm pleased with particularly the second-half performance and the result."