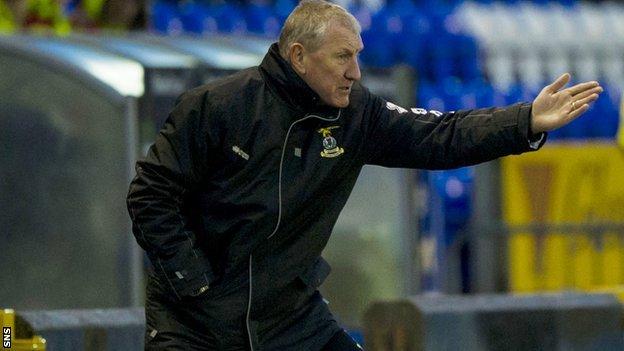 Inverness manager Terry Butcher distanced himself from rumours linking him to the Hibernian manager's job after the win over Kilmarnock.

Aaron Doran and Graeme Shinnie had Inverness in command before Darren Barr halved the deficit on 76 minutes.

The result moved the Highlanders back up to second spot in the table, with pre-match talk linking Butcher with a move to Easter Road.

"At this moment in time, I'm staying here - that's it," said Butcher.

Pat Fenlon stepped down as Hibs manager on Friday after fans chanted for him to go after the League Cup defeat to Hearts.

Butcher's name has been mentioned as a possible replacement after leading his men into the semi-final for the second year in a row, while also remaining consistently in the top half of the league.

All I would say is that it's just speculation as far as I'm concerned.

However he says he feels there is still more to achieve with the club.

"All I would say is that it's just speculation as far as I'm concerned," Butcher said.

"We don't know how good this club could be, where it could go, or what's at the end for us."

The 2-1 home win over Kilmarnock was Caley Thistle's seventh league win in 11 games, and moved them to within five points of league leaders Celtic.

"In the end it was a great win for us because we were under a bit of pressure in the second half," added Butcher.

"Kilmarnock switched their system round and made it difficult for us. However, the boys saw it out very comfortably."

Kilmarnock manager Allan Johnston felt his side were unlucky to fall to their first defeat in three matches, as they missed out on the chance to leapfrog Ross County in the table.

"With the conditions in the first half it was difficult, but Inverness were probably the better team," he said.

"However, I felt that we were by far the better team in the second half.

"We put them under a lot of pressure and were unlucky not to get the equaliser."