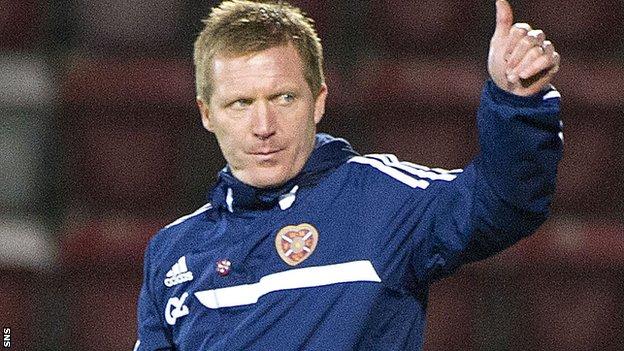 Hearts boss Gary Locke was disappointed in his players' lack of belief after going a goal down to St Johnstone.

The leaves his young side 15 points adrift at the bottom of the Premiership.

"When you go a goal down, you can't let your heads go down as badly as that, because there were still 70 minutes left to play," he said.

Locke still believes that he has the squad to help the Tynecastle club escape relegation.

But Hearts, who started the season with a 15-point penalty for going into administration, have now gone eight Premiership games without a victory,

Locke's men had gone into the game against St Johnstone buoyed by their midweek League Cup quarter-final victory over city rivals Hibernian.

However, after a bright start, they lost out to goals from Nigel Hasselbaink and Stevie May.

"I'm really disappointing because, during the week there, the way that we played we deserved to win the game and, if you put in a similar type of performance today, you would have probably taken something out of it," said Locke.

"That's the most disappointing thing because we have to maintain that level of consistency and we don't seem to be getting it at the moment.

"We didn't start the second half well enough and it has cost us.

"I think we did okay in the first half. We had a few chances but lost a poor goal again and the start to the second half killed it for us.

"We did not defend the second goal well, had numerous chances to clear it and Stevie May's scored a really good goal from his point of view but a poor one from ours."