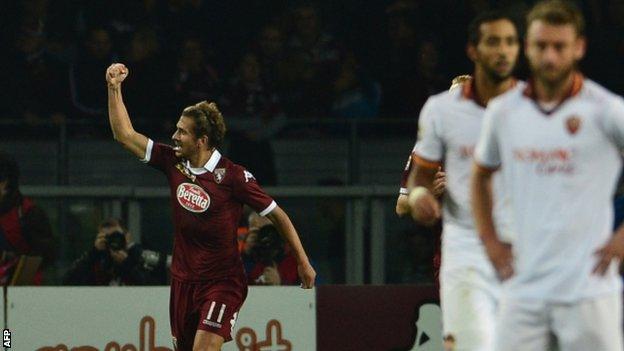 Roma's 100% start in Serie A ended when they were held at Torino in their 11th game of the season.

Dutchman Kevin Strootman put Roma ahead in the first half with a close-range finish.

But after the break Torino's top-scorer Alessio Cerci became just the second player to score against Roma this season to earn a deserved point.

Roma became the first team to win the opening 10 matches of a Serie A season when they beat Chievo 1-0 on Thursday.

They top the table by three points, but Napoli and Juventus kept the pressure on the league leaders with wins over Catania and Palma respectively on Saturday.

It looked like their record-breaking start to the campaign was going to continue as they dominated the opening 45 minutes against a Torino side winless in their previous six league matches.

But, without the injured Francesco Totti and Gervinho, the visitors always lacked that cutting edge that had seen them score 24 goals in 10 matches so far this season.

They did break the deadlock on 28 minutes when Strootman calmly stroked the ball past goalkeeper Daniele Padelli from 10 yards from Miralem Pjanic's low cross.

Roma's perfect start to the season had been built on a solid defensive platform but, without the suspended Leandro Castan, the visitors looked surprisingly fragile at the back.

And, after a bright to the second half, Torino took full advantage when top-scorer Cerci flicked Riccardo Meggiorini's cross into the net for his eighth goal of the season on 63 minutes.

The visitors pushed hard for a winner towards the end but were unable to create many notable chances and Torino celebrated a hard-fought point that keeps them 12th in Serie A.

Earlier on Sunday, Andrea Ranocchia became the first Italian to score for Inter Milan this season as they eased to a 3-0 win over Udinese.

Argentine Rodrigo Palacio had put Inter ahead, before Ranocchia volleyed in with just under half an hour gone. Ricardo Alvarez completed the scoring in stoppage time at the end of the game.