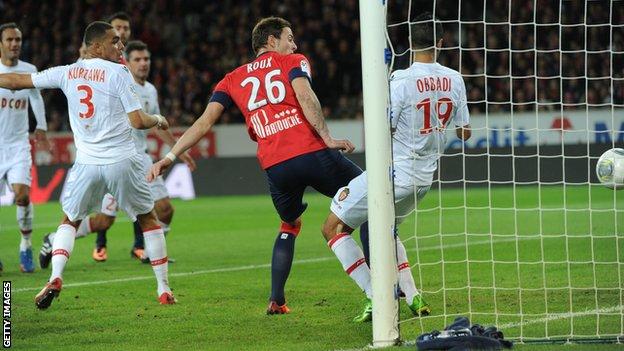 Monaco lost their first Ligue 1 game of the season as two goals for Nolan Roux gave Lille victory that moved them up to second.

Roux poked home the opener in the first half before tapping in the second after a counter attack midway through the second half.

Monaco had few chances, but were also frustrated by Lille goalkeeper Vincent Enyeama.

Lille move above Monaco and to within two points of leaders Paris St-Germain.

Monaco had arrived at Lille looking to record their eighth win in 12 league games, and one that would see them remain level on points with PSG.

But they were lacklustre for much of the first half, with Falcao finding himself largely isolated.

Instead it was Lille who looked the more dangerous and they opened the scoring just before the half hour mark.

Marka Basa headed goalwards and Roux was on hand to stab in from close range.

Monaco had a chance to equalise soon after when Yannick Ferreira Carrasco pounced on a poor back pass and although he was beaten to the ball by Enyeama, the keeper's clearance looped into the path of Falcao, whose audacious first-time effort from distance flew over the open goal.

The visitors had a strong call for a penalty waved away early in the second half when Layvin Kurzawa appeared to be fouled inside the area as he had raced on to a James Rodriguez pass.

That, perhaps, proved a crucial moment as Lille doubled their advantage with 20 minutes remaining. Falcao's shot was expertly saved by Enyeama and the home side embarked on a quick counter attack as Salomon Kalou fed Rio Mavuba, who in turn squared for the unmarked Roux to strike from close range.

The goal effectively ended the game as a contest, but Enyeama ensured Lille's seventh successive league clean sheet with a couple of important late saves, keeping out Falcao's angled shot and then Riviere's follow up.