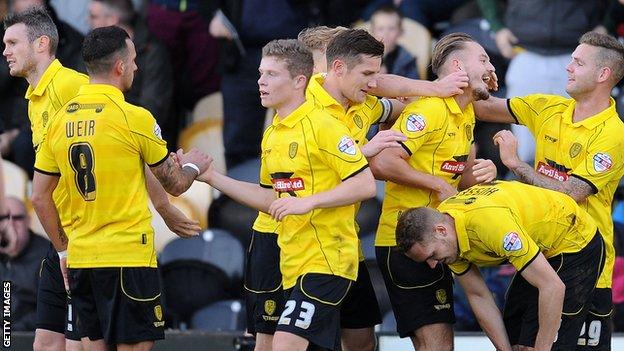 Adam McGurk shot wastefully high when well placed for the Brewers, but atoned soon after when he turned in Chris Hussey's corner to put them ahead.

Any hopes of a Bulls comeback ended when Matty Palmer fired in from 20 yards out for his first career goal.

"I'm very satisfied. It could have been a very tricky tie.

"I heard a lot about Hereford in the week; about how they weren't too happy about moving the game and I just thought they'd tried to use that to galvanise their team a bit.

"They'd talked a bit about trying to get their season back on track and using it as a bit of a springboard and I think we were very keen to not be that springboard.

"I think it was also important for us to win at home and get that ball rolling a little bit for ourselves, so we tried something a bit different and I thought it worked quite well."