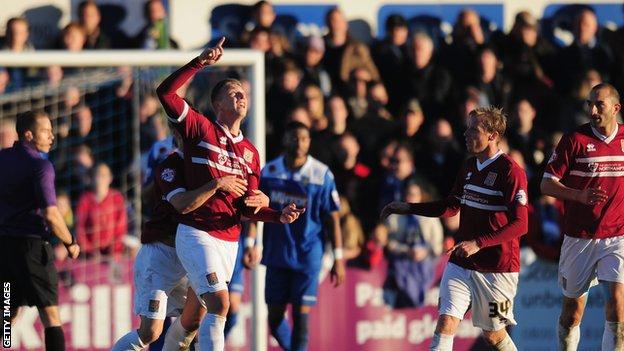 League Two Northampton scraped past non-league Bishop's Stortford to go into the second round of the FA Cup.

Kane Ferdinand headed against the bar for the Cobblers early on, which Sean Francis replicated at the other end.

It took until the hour-mark for Danny Emerton to curl in a superb effort, before Luke Norris rolled into an empty net to double Northampton's lead.

Reece Prestedge thumped in for Stortford, but the visitors held on in an uncomfortable last 10 minutes.

The Cobblers may be 27 places above the Blues on the football ladder, but the home side, third in the Conference South, came into the game off a seven-match winning run and faced a team propping up the Football League and with just one win in their last 14.

Stortford had to endure Northampton pressure though, particularly early on, with Wright making saves from Jacob Blyth and Norris to keep out the visitors, who were keen to pump the ball into the box at every opportunity.

Next up for Northampton

But the hosts grew in confidence, particularly after Francis had struck the woodwork, and Prestedge and Kyle Vassell, on the verge of joining Peterborough United this week, both came close.

The chances kept on coming for Northampton though - Norris and Blyth both failing to convert in the midst of a goalmouth scramble.

And the breakthrough finally emerged midway through the second half when Emerton, collecting a flick-on by Blyth, cut in off the left flank and arced the ball in from 20 yards.

Stortford, full of energy, showed signs of withering, especially when Norris, picking up the loose ball after Chris Hackett's shot was blocked, rolled in his fourth from five starts.

Prestedge gave the Blues hope though, crashing in from 12 yards out, only for Aidy Boothroyd's men to keep their cool against a Stortford onslaught and extinguish any prospect of an FA Cup fairytale on the Hertfordshire-Essex border.

"I thought we had a 20-minute period in the second half where we panned out.

"In the first half I felt there wasn't a lot in it. I thought we gave a good show. In the first 10 minutes we looked very nervous but we grew into the game. Overall I was really pleased.

"We didn't start as bright as I wanted in the second half. We got into the game and then had a spell where we showed them too much respect.

"I was really pleased to see when we got that goal back that we had another injection for the last 10 minutes. We could have even salvaged a draw right at the death, which would have been massive.

"It's been a fantastic journey for the boys. I can't be any prouder than what I am. The club is now in a better position than when I first walked in."

"It was a really tough game. They're a very lively team and we stood up to the task.

"I thought we were excellent. We created lots of chances. It's indicative of our season, creating chances but not having the knack of putting them in the net.

"We made it difficult for ourselves after we scored. Credit to our opposition, they made it a tough game.

"They get a goal at the end and it gives them renewed energy and vigour. In the end we managed to see it out. The only disappointment for me, if there is anything, is that we didn't score more goals."

Shots on Target
Home2
Away11