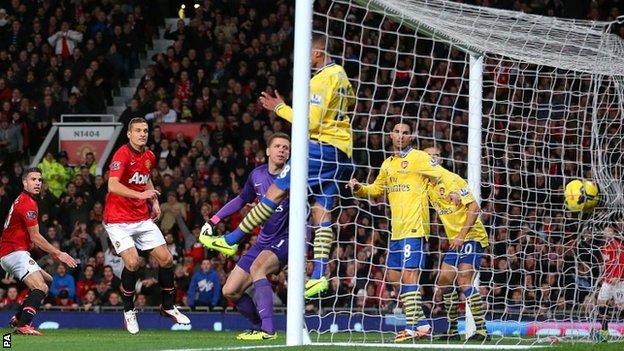 Robin van Persie punished his former club once more with the winner as Manchester United came out on top in the battle with Premier League leaders Arsenal at Old Trafford.

Van Persie, who scored for United against Arsenal in both games last season following his £24m move, gave United a precious three points with a fine 27th-minute header from Wayne Rooney's corner.

Gunners manager Arsene Wenger insisted before the game that Van Persie was still "an Arsenal man" but the Dutch striker showed no hesitation in celebrating the goal that pushed United up to fifth in the table and to within five points of their opponents.

United boss David Moyes knew defeat would have left them 11 points adrift in the title race, a gap which might have proved beyond even the reigning champions.

Wenger revealed sickness in his camp had deprived him of defender Per Mertesacker and midfielder Tomas Rosicky, while Mikel Arteta was fit to start despite also feeling unwell. This may have contributed towards a decidedly flat first 45 minutes.

And despite a much-improved second half, which included two perfect crosses from full-back Bacary Sagna that somehow went untouched, it was United's fans who were celebrating a win of great significance at the final whistle.

It was a disappointing end to a week in which Arsenal made major statements of intent against Liverpool in the Premier League and away to Dortmund in the Champions League.

The Gunners will still be delighted with their start to the season but this was United's day and Moyes will now feel they are building momentum after a third successive league win.

It was the familiar figure of Van Persie who decided the destiny of this game, getting away from Olivier Giroud to meet Rooney's delivery and direct a fine header over Kieran Gibbs on the line.

In a week when much debate has centred on Tottenham's decision to allow goalkeeper Hugo Lloris to continue after his collision with Everton striker Romelu Lukaku at Goodison Park, Szczesny required lengthy treatment following a clash of heads with United's Phil Jones.

He was able to resume - with Jones very unfortunate to be booked for something that was clearly accidental - but Vidic was not so lucky after he was caught on the head by United keeper David de Gea as he punched clear.

Vidic got to his feet but went straight off before half-time and was replaced by England midfielder Tom Cleverley for the second half.

Arsenal, as they needed to, started the second half with greater purpose but Wenger clearly felt the need for greater creativity as he replaced defensive midfielder Mathieu Flamini with Jack Wilshere on the hour.

Just as Wilshere was preparing to come on, Rooney wasted a good opportunity to give United that crucial second goal, doing the hard part to escape Sagna on the edge of the area only to screw his left-foot shot wide.

Chris Smalling - who was playing at right-back for United - headed wide from Van Persie's free-kick, then in the dying seconds Bendtner was unable to get a touch on a wonderful delivery from Sagna and Arsenal's final chance had gone.