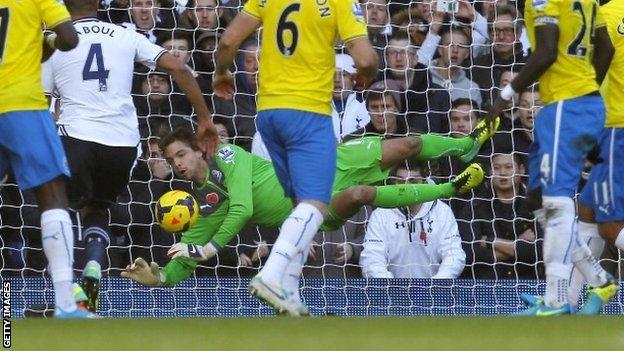 Tim Krul made a string of outstanding stops to deny Tottenham against Newcastle, who took all three points thanks to Loic Remy's early strike.

The Dutch goalkeeper made 14 saves in total at White Hart Lane - the most by any goalkeeper in the Premier League this season.

Newcastle created few chances, but unlike Spurs they took one when Remy slotted in from Yoan Gouffran's pass.

The win moves the Magpies up to ninth while Tottenham are now in seventh.

How Tottenham failed to score at White Hart Lane will be part of Andre Villas-Boas's port-mortem, although he will no doubt praise Newcastle's keeper, who produced one of the best performances of this Premier League season.

Krul showed the sort of form that helped Newcastle finish fifth two seasons ago, blocking Spurs' efforts with almost every part of his body.

The Netherlands international showed great elasticity to tip over Roberto Soldado's flicked header before pushing over Paulinho's effort that was bound for the top corner in the first half.

Krul was then twice called into action after the restart, making two saves with an outstretched boot - the first, to block Christian Eriksen's point-blank shot before repeating the trick to prevent Gylfi Sigurdsson's free-kick from creeping in. Younes Kaboul followed up, but he was thwarted by a tremendous block on the line by defender Mapou Yanga-Mbiwa.

Tottenham continued to pile on the pressure in the closing stages and when it was not Krul, it was the bar that came to the rescue for Newcastle when Jan Vertonghen's header crashed off the frame.

In total, Spurs had 31 shots to Newcastle's eight - although the Magpies scored with one of their four on target.

That goal came in the 13th minute when Yoan Gouffran and Loic Remy, who both scored in the 2-0 win over Chelsea last week, combined brilliantly.

Gouffran, a £500,000 January signing from Bordeaux, is proving to be a key player in Newcastle's midfield. He chased down Brazilian Paulinho before threading a pass through for Remy, who took the ball around Friedel and slotted in for his seventh goal in his last seven league appearances.

Remy should have scored moments earlier when fellow France international Yohan Cabaye played him in with a delightful ball with the outside of the boot, but just as the striker was about to shoot, in came Vlad Chiriches with a brilliantly-timed tackle.

That is now two successive victories for Alan Pardew over London sides, while his counterpart Villas-Boas will be rueing having missed a golden chance to close the gap on north London rivals and league leaders Arsenal.

Shots on Target
Home14
Away4