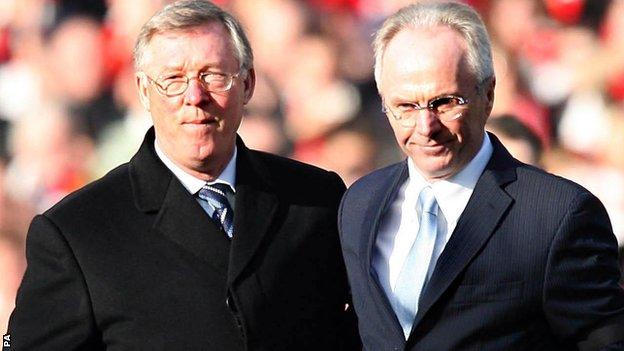 Sven-Goran Eriksson says he signed a contract in 2002 to take over from Sir Alex Ferguson at Manchester United.

Ferguson retired this summer after 26 years in charge at Old Trafford but had announced his intention to stand down in 2002 before reversing the decision.

"A contract was signed - I was United's new manager," said then England boss Eriksson in a new autobiography.

This was an opportunity to manage Manchester United

"We haven't read the book so we are unable to comment," the club's director of communications Phil Townsend said.

Swede Eriksson, 65, was in charge of England from 2001 to 2006 and later became boss of United's neighbours Manchester City.

His book has been serialised by the Mail on Sunday and in it he claims he was approached by the club to replace the Scot and accepted a deal.

He said: "I knew it would be tricky. I had a contract with England until the 2006 World Cup and I would be severely criticised if I broke that contract.

"But this was an opportunity to manage Manchester United."

Ferguson spoke about the possibility of Eriksson replacing him at Old Trafford in his own latest autobiography, saying he suspected United had lined up the Swede.

"The head-hunters were due to meet a candidate to succeed me the following week," wrote Ferguson.

"Sven-Goran Eriksson was to be the new United manager, I believe. That was my interpretation, anyway,"

Eriksson, currently manager of Chinese side Guangzhou R&F, also alleges Ferguson tried to stop him taking Wayne Rooney to Germany in 2006 after the striker had broken a bone in his foot against Chelsea towards the end of the Premier League season.

There was a difference of opinion between United's medical staff and England doctor Leif Sward.

Eriksson says in the extract: "Leif and I met Ferguson and United's doctor at the United training ground. 'He cannot play in the World Cup', Ferguson said flatly.

"The doctor brought out some X-rays that he said showed Rooney's broken bone would not heal in time.

"Leif was one of Europe's foremost specialists on this kind of injury. I just wish I could have filmed Ferguson's face when Leif explained that Wayne's break would heal in time for the World Cup.

"When Leif had finished, I turned to Ferguson. 'Sorry, Alex,' I said. 'I will pick Rooney'.

In response, Townsend told BBC Sport: "On the question of Rooney, we put a statement out at the time and our position was well documented."

United said, following a scan on 7 June 2006, they thought the striker would not be ready to play until after the group stage of the World Cup.

Independent medical experts, professors Angus Wallace and Chris Moran, believed Rooney would be fit for the third group game against Sweden on 20 June.

Rooney ended up playing in the second game against Trinidad and Tobago on 15 June, a decision the club were unhappy with at the time.

The United striker had a disappointing tournament, failing to score, and getting sent off for standing on Ricardo Carvalho in the quarter-final against Portugal, which England lost on penalties.

On Monday, Sven-Goran Eriksson will be in the BBC Radio 5 live studio from 19:00 GMT for a special edition of the Monday Night Club.